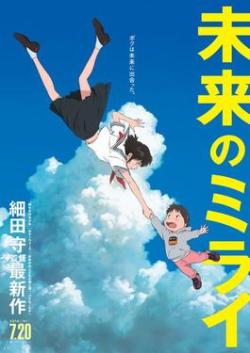 Kun (Moka Kamishiraishi) is a four-year-old boy living in Japan. When his parents bring home a babysister named Mirai, he is hurt and resentful. Hating the loss of attention, he begins to misbehave until he is visited by a teenage Mirai from the future – sending him on a series of magical lessons in his family’s past, future, and elsewhere.

Mamoru Hosoda has been one of Japan’s most creatively and commercially successful anime directors of recent years, thanks to a string of pictures including The Girl Who Leapt Through Time, Summer Wars, and Wolf Children. Mirai is his seventh directorial feature, and two TV spin-offs aside it may also be his weakest. There is superb artistry to be seen, but it seems to serve a lesser purpose. It is a pretty confection, rather than a must-see work of art. Given the quality of his earlier features that is quite a disappointment.

The film returns once again to concepts and themes of family and struggling relationships within them. It’s a theme he absolutely nailed in Summer Wars – still his finest achievement – but also tackled in most of his other films. By this stage the well is running dry, and Hosoda’s treatment of the material is feeling worn-out and tired. He particularly struggles here because his protagonist is not entirely likeable. There is only so long one can enjoy watching a bratty, self-indulgent child before it becomes exhausting, and Mirai passes that point well before the halfway mark. Each set piece struggles to maximise its impact because each of them treats Kun better than he deserves. It is also a rather weak narrative for a film: a poorly-behaved child is taught to be a little nicer thanks to magic and time travel.

The fantasy sequences are tremendously conceived, and lead to some delightful scenes in isolation. At one stage Kun meets his pet dog in humanoid form. In another he is taken on horse and motorcycle rides along a beautifully conceived and evocative late 1940s Japanese coast. The film’s climax takes the furthest steps of all, with some great design and animation work that reminds us just how talented a filmmaker Hosoda is.

Even outside of the fantasy scenes there is some excellent work. Kun’s house is beautifully designed architecture, and all of the small details of clothing, toys, even facial expressions show subtlety and thoughtfulness. It is the film’s one big problem in a nutshell: the fine detail is near-faultless, but it is all in service of an outrageously limited and slender story. Fans of Hosoda’s previous work will likely find some value, but you should go in with measured expectations. Casual fans of anime would do better aiming a little higher, if this is likely to be the one anime you watch this year.