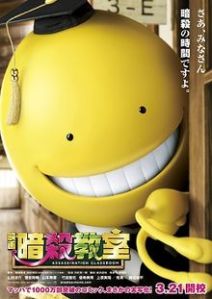 A bright yellow tentacled alien with an eerie smiling, spherical head blows a hole through the moon. He then happily announces it’s going to do the same to the Earth in one year, unless a classroom of 15 year-old Japanese high schoolers can assassinate him first.

That’s the premise of Assassination Classroom, a serialised manga by Yusei Matsui. It’s been popular enough to spawn an anime television series and now a live-action feature film from director Eiichiro Hasumi. It’s a pretty weird film, given the absurd appearance of its primary antagonist, and it manages to showcase the best and worst parts of adapting such a surreal manga serial to the big screen. On the one hand it’s delightfully odd and playful. On the other it’s painfully episodic and does have a tendency to stretch its welcome. Overall it’s a sufficiently enjoyable diversion, albeit with a number of frustrating elements – not the least of which is a “to be continued” tag at the film’s conclusion.

Eiichiro Hasumi remains best known in Japan for his hugely popular Umizaru films, spun off from the television series of the same name. English speaking audience will know him best for another manga adaptation, Wild 7 (2011). Here he stretches what looks to be a fairly tight budget to present a genuinely funny computer-generated alien teacher, nicknamed “Mr Octopus” by his students. Matsui’s original bold design is translated directly to the screen, which gives the whole film a slightly heightened and off-kilter aesthetic. Usually when an abstracted medium like manga gets adapted to a realist medium like cinema you would expect a few changes in the look and feel, but instead it’s more like a cartoon/live-action hybrid like Robert Zemeckis’ Who Framed Roger Rabbit. It is a remarkably effective technique, and one that helps deliver the bulk of the film’s humour.

Mr Octopus is a fascinating character, because while he enters the frame with a threat to wipe out the human race he proceeds to act as a genuine teacher and guidance counsellor to a group of underachieving teenagers. His motives remain relatively inexplicable right up to the film’s final moments, and even then it seems there is a lot being left unanswered for the sequel (which premiered in 2016).

The human cast are the standard group of under-confident, awkward teenagers who seem to populate most Japanese films of this type. To an extent you could swap the casts of this and Battle Royale without difficulty, although Assassination Classroom is nowhere close to as bleak or confrontational. Certainly no one in the cast particularly stands out – they do their job in narrative terms, but are all thinly drawn.

I have never read the original manga nor seen the anime series, so I cannot comment on Assassination Classroom‘s success in terms of adapting those earlier versions. As a film in its own right it’s partially successful: weird, often-times oddly funny, but ultimately much too episodic and open-ended to properly satisfy.

This review was first published at The Angriest on 31 October 2015.