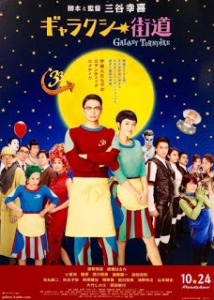 It is the year 2265. Midway between Earth and an outer solar system colony lies the Galaxy Turnpike, where travellers can pull over their spacecraft and relax at a retro-styled Sandsand burger joint. Inside the husband and wife team of Noa (Shingo Katori) and Noe (Haruka Ayase) operate the kitchen while coping with a disintegrating marriage and a dwindling number of customers.

Galaxy Turnpike essentially works as a series of inter-connected comedic vignettes. In one booth a fussy businessman (Kanji Ishimaru) negotiates with a hard-sell pimp (Koji Yamamoto) to meet an alien sex worker for the first time. In another, a company auditor (Yasunori Danta) begins to hallucinate a mime artist and a range of cartoon animals. In a third, a nervous police officer (Shun Ogiri) struggles to reveal to his captain (Kenji Anan) that he is actually an Ultraman-style superhero named Captain Socks.

This is oddly familiar territory for fans of director Koki Mitani, at least in terms of style if not content. It shares most of the director’s strengths and weakness. The film is definitely too long at 109 minutes, and could easily benefit from getting trimmed by a solid 10 to 15 minutes. It is also at its slowest during its opening scenes, which makes it quite a chore to watch until the various storylines are established and begin working at their best. Once up and running Galaxy Turnpike is a nonsense-filled romp. Some scenes obviously work better than others, but it never stops being at least pleasantly amusing. There is also Mitani’s expected theatrical quality: he has enjoyed a long career in theatrical comedy, and that theatricality is evident in his other films such as The Uchoten Hotel. You could easily imagine the bulk of Galaxy Turnpike appearing live on stage without significant difficulty.

The core of the film focuses on Noe and Noa and their struggling marriage. Noe wants out: he’s written an application to leave managing the restaurant and relocate to Earth. His dour, controlled demeanour is disrupted by the arrival of his ex-girlfriend (Yuka) and her new alien husband (Zen Kajihara), a laconic individual who looks like Star Trek‘s Mr Spock with an additional metre-long tentacle-like tongue. Noe goes through a whole crisis about whether he made the right choice to abandon his girlfriend for Noa – a crisis made surreal by the fact that his ex-girlfriend’s hair is inexplicably a massive flowering shrub. At the same time Noe is surprised when Mendes, the alien she hired to remodel the restuarant (Kenichi Endo), strips down to PVC festishwear and proclaims his undying love for her.

The reluctant auditor has perhaps the film’s best sequence: he begins to hallucinate solid objects, including a creepy mime (Kazuyuki Asano) who copies every gesture he makes as well as a cartoon dog from his childhood. The integration of cel animation into live action is comparatively primitive, but easily serves its comedic purpose. Two other highlights are Shinobu Otake as a sullen elderly fry cook with electrical super-powers, and pop star TM Revolution (aka Takanori Nishikawa) as a nervous frog-like customer who spends the bulk of the film sitting quietly eating his burger in a growing puddle.

Galaxy Turnpike starts slow, and keeps a very modest ambition throughout, but given enough patience to settle in then it becomes rather charming. There is a lot of nonsense humour going on here, and while some of it is very hit-and-miss, it does win you over in the end. It’s a strange little film. It may not reach classic status by a long mark, but it is certainly memorable.

This review was originally published at The Angriest on 19 December 2016.