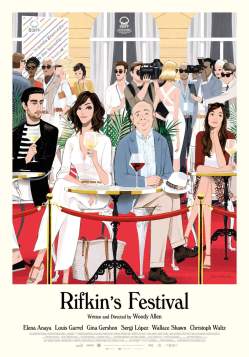 Woody Allen’s most recent feature film finally hits American theatres on Friday, almost 18 months after it was released in Europe. It is a far cry from the famed writer/director’s former stature, when every arthouse and independent cinema around the world would be screening his annual feature. Between Bananas in 1971 – his third directorial feature – and Wonder Wheel in 2017, there were only three years in which audiences did not get a new Allen film – and two years in which we got two. More recently, things have slowed considerably. A Rainy Day in New York was shot in 2018 but released in 2019 after Amazon refused to release it, while Rifkin’s Festival was released in most non-English markets in 2020 but is only now reaching America. It is a strange world we live in when Allen’s films are getting released in Estonia and Kazakhstan before they hit his beloved New York.

There is no word on any future Allen movies coming down the line. For one thing the man recently turned 86, and cannot be reasonable expected to work to such an aggressive schedule any more. For another there are the decades-old but constant allegations that he sexually abused his daughter. It was the renewed claims made again in 2019 that led Amazon to kill their distribution relationship with him via an acrimonious court battle. The COVID pandemic that has plagued film production since early 2020 is also a very likely factor. At any rate, with no new film on the horizon, a ruined reputation, and only a few years short of 90-years-old… apologies for being ghoulish, but this may very well be Woody Allen’s last hurrah.

A major problem with Allen’s late career filmography is that, by and large, reviews of the films can effectively write themselves. As a filmmaker whose artistic reputation at least seems mired in his commercially popular comedies of the 1970s (basically Annie Hall and Manhattan), almost every film of the past two decades or so seems to resemble a weaker variation of the same old comedic style, intellectual ponderance, and ossified technique. Like many of those recent films, Rifkin’s Festival seems to resemble a mixture of older, better work. As with A Rainy Day in New York, the die-hards will continue to find some value. General audiences will not find any appeal here; not that they would be considering it anyway.

Once again it is a return to a standard mixture of intellectual musing, self-deprecating references to being Jewish, and what seem like increasingly alien ideas of how romantic relationships work and how much money people earn. The New Yorkers of the Woody Allen cinematic universe never really talk about money. Poor people only turn up in the past, back when the young Allen himself was. In Allen’s fictions ageing neurotics are not just independently wealthy but also seem irresistible to women literally decades younger than them. We do not quite get there in Rifkin’s Festival, but it still speaks the same language of many of his earlier films.

Where the film does work well is in the areas where Allen’s films usually do. When a joke lands, it is often with an unexpected bark of laughter. The characters always seem much smarter than the usual protagonists in American cinema. He has written, and continues to write, excellent roles for women. The female leads of Rifkin’s Festival – American Gina Gershon and Spain’s Elena Anaya – deliver superb performances out of well-rounded and complex characters. It is great to see Gershon get such a strong role, as she’s consistently delivered over the decades in films that vary wildly in overall quality. As the titular Rifkin, Wallace Shawn – forever typecast as The Princess Bride‘s Vizzini – capably acts as a mouthpiece for Allen’s own opinions. He is weary of film festivals of the contemporary world, and pines for the days of Fellini, Bergman, and the nouvelle vague. One cannot help but imagine Woody Allen pines for the Hollywood of the past as well.

The film’s action is interspersed with odd dream sequences in which Rifkin plays out his own fears via a series of film parody sketches. They are an odd addition, and feel more like Allen’s earliest parody-based works than anything he has written or directed in recent years. A small cameo by Christoph Waltz aside, they entirely fail to impress. What felt sharp and funny in 1971 feels tired and jaded now.

This is really Woody Allen at his most mediocre. Rifkin’s Festival is not the worst that he has produced, but even at its peak you cannot quite see his finest films on the horizon. It hits limited theatres in the USA this week; one imagines an Australian release will go direct to DVD or streaming.