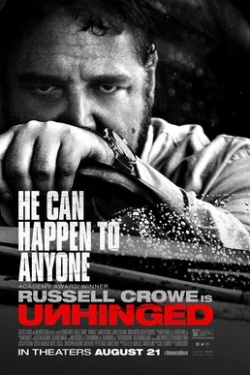 “Russell Crowe is Unhinged” went the marketing copy, and I would not be surprised to discover that was the premise that sold Solstice Studios on this mercifully brief and vaguely unpleasant road rage thriller. The cast – including Crowe – do their best with what they are given, but even for a B-grade potboiler this is pretty weak stuff. If your hope is to see Crowe play a cartoon-level psychopath, this could be a fun movie for you. If your hope is for a half-decent chase film, you had probably better look elsewhere.

It is not just Russell Crowe’s personal history that makes him seem such a perfect match for the role – a 2005 incident in which he threw a telephone at a hotel concierge has dogged his reputation for years – but also his eyes. It was evident from his break-out turn in Romper Stomper: Crowe is one of a select few actors who can deliver a gaze on camera that will make you believe he could kill you. Daniel Craig has it. Robert Shaw had it. Crowe has it about as emphatically as anyone could.

Recently divorced single mother Rachel Flynn (Caren Pistorius) runs late to drop her son off at school. When she cuts off a pick-up truck, harshly sounding her horn in the process, she earns the ire of its driver Tom Cooper (Crowe). When Rachel refuses to apologise, Tom embarks on a spiralling campaign of murderous rage to punish her for her perceived transgressions.

Unhinged is essentially the patriarchy re-imagined as a horror monster. The first time we see Tom, he is clubbing his ex-wife and her new partner to death in their home before setting the house on fire. When Rachel refuses to apologise for cutting him off in traffic, his response is immediately and homicidal. Throughout the film he spouts a jumble of men’s rights activist talking points as a detour around any sort of character development or depth. In a better film, that sort of detail would seem unnecessary, but Unhinged is not a particularly good movie. It has characters behave in bizarre and foolish ways to justify its narrative. It contains lapses in story logic so large that Tom Cooper could reverse-park his truck into them.

This is a very violent movie, which is not anything new for the genre, but it tonally off-kilter to the point of feeling odious. There are plenty of features where nice people are murdered or injured, typically with a minimum of graphic detail. There are plenty of features where characters are provocatively killed with a lot of blood, gore, and both visual and aural trauma. These almost invariably involve the character committing a transgression of some sort; either genuinely morally compromised as in the Saw movies, or simply behaving in an overtly foolish manner. As an audience we generally accept the mass slaughter of teenagers in a 1980s slasher film because those teenagers are deliberately low on character detail and always commit an agreed ‘sin’ of the genre. They have sex with one another and drink alcohol, or they check out creepy noises from a basement on their own. Whatever their transgression, the film signals their mistake and markets them out as acceptable to torture and kill.

Unhinged does not do this. Instead the film is written and directed (by Carl Ellsworth and Derrick Borte, respectively) in such a manner that Tom Cooper simply murders innocent people. There are no morally compromised victims, and no compact between film and viewer on agreed sins and transgressions. Instead there is simply a very angry man slashing, stabbing, pummelling his victims and occasionally setting them on fire. In a film with a stronger narrative, or a better set of characters, you might overlook just how unpleasant it all is. With Unhinged, there is effectively little else but the violence.

The film received a lot of attention upon opening in 2020 because it was the first American film of all normal scale to receive a theatrical release during the COVID-19 pandemic. It should count its ironically lucky stars; released six months earlier and no one would have even noticed that it existed.