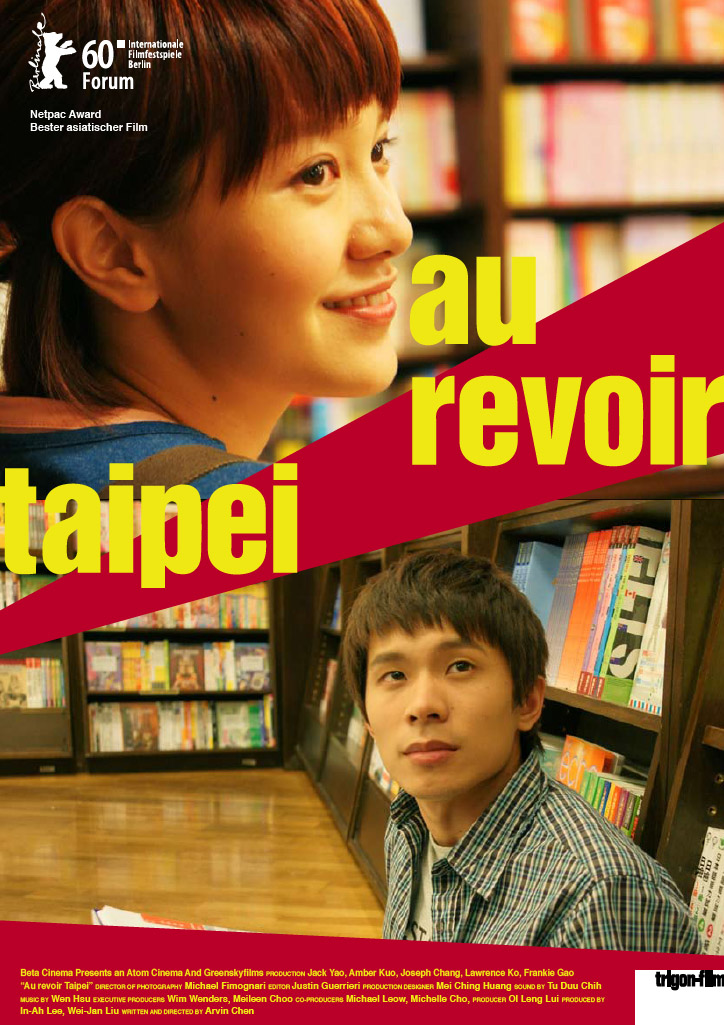 A lively but small-scale crime caper gets mixed with light romantic comedy in this charming Taiwanese feature; the directorial debut for Arvin Chen (Will You Still Love Me Tomorrow). Its wry sense of humour should please a fairly broad audience, and its Taipei setting should appeal a lot to international fans of the actual city (of which I am, very enthusiastically, one).

Kai (Yao Chun-yao) is bereft when his girlfriend leaves Taiwan for Paris. In an attempt to impress her he starts learning French by reading a guide book on the floor of a local bookshop – all the while blind to the affections of bookseller Susie (Amber Kuo). When Kai tries to earn enough money to buy a ticket to France, he makes the mistake of asking the local crime boss (Frankie Kao) for help.

At the heart of Aur Revoir Taipei is its budding romance between Kai and Susie. It benefits enormously from charismatic performances by Yao and Kuo – her acting debut. Together they bring warmth to the picture, balancing its more comedic antics.

Surrounding the romantic core is a small scale crime comedy worthy of a Guy Ritchie film. Brother Bao (Kao) is a local gangster and a regular at Kai’s family restaurant. He is willing to bankroll Kai’s trip to Paris, so long as he delivers a secret package while there. Meanwhile Bao’s ambitious nephew Hong (Lawrence Ko) sees an opportunity to double-cross his uncle and take over the neighbourhood. Backed by a small gang of followers, he winds up kidnapping Kai’s best friend Gao (Chiang Kang-che) – a convenience store employee with a crush of his co-worker. Meanwhile two bumbling police detectives are on the trail of Bao’s mysterious package. It is a highly effective comedy of errors, with each story thread intersecting with the others in fast-paced and unexpected ways. There is a lot of running around and plenty of comic misadventure, all played with a deft and light touch.

A lively violin-based score bring a sense of Paris to Taiwan, while Chen’s direction and Michael Fimognari’s cinematography captures Taipei with a grounded, somewhat realistic tone. It is a mild surprise to see Fimognari working on a Taiwanese production – he is an American talent who went on to collaborate an awful lot with horror filmmaker Mike Flanagan. Here he captures the city extremely well.

Au Revior Taipei is a small-scale but enormously watchable delight. While it is littered with cultural specificity about Taiwan, it tells a broadly universal story that works in any language. After this, Arvin Chen has only directed one other feature to date. That seems a shame; I have not seen his later work, but this debut is positively brimming with potential.