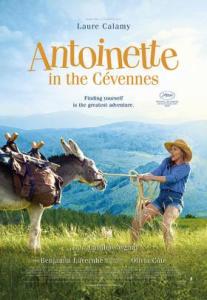 Comedy hit Antoinette in the Cévennes was one of the most popular films at this year’s Alliance Française French Film Festival. Thanks to Madman Entertainment, Caroline Vignal’s wonderful misadventure of hiking with a donkey and chasing after love is now widely available on DVD and to download.

Antoinette (Laure Calamy) is a lovestruck primary school teacher in an affair with Vladimir (Benjamin Lavernhe), the father of one of her students. When he breaks off a planned dirty weekend to go holidaying with his family, Antoinette impulsively decides to follow – only for Vladimir to be nowhere to be seen, and Antoinette lost on a six-day hiking adventure with a donkey named Patrick.

Antoinette in the Cévennes (in some English-language territories, it has been released as My Donkey, My Lover, and I) is a small-scale delight. Best categorised as a comedy, it manages to be warmly amusing without resorting to literal gags and jokes. It has a strong dramatic through-line, yet never loses its lightness of touch. To be honest, the closest genre to what Caroline Vignal has directed here is pastoral fiction – a nostalgic, gentle story with a rural setting – but that is not really a kind of story with which 21st century viewers are familiar. It is an effective and easy-going little gem: rich in character, and considerate towards its flawed, foolish protagonist.

In 1879 the Scottish novelist Robert Louis Stevenson wrote a memoir of his own hiking vacation with a donkey: Travels With A Donkey In The Cévennes. This six-day journey is replicated by travellers and tourists today. When Antoinette finds herself on her own hiking adventure, she is entirely untrained for such effort. She has never hiked before, and has never dealt with a donkey either. Whimsically named Patrick, her animal companion is so distinctive and obstinate as to qualify as a supporting character in his own right. I cannot claim to know what a well-directed donkey looks like, but certainly Vignal has directed an effortlessly amusing film around him.

Laure Calamy is outstanding as Antoinette, managing to balance genuine likeability with some truly horrendous life choices. When she tries to follow her lover to his holiday with an unsuspecting wife and daughter, it seems to most selfish and cruel of actions. The film does not shy away from that either, with supporting characters through the film freely offering their own judgements of her behaviour. At the same time, both performance and screenplay are very forgiving of Antoinette. She never seems a bad person; rather a inherently nice one who deserves to make better decisions. Her audience will likely want her to find genuine happiness rather than receive some kind of come-uppance.

Benjamin Lavernhe keeps his role as Vladimir as simple and realistic as he can manage, and this enables the film to swing back and forth in responding to his own behaviour. Olivia Côte is arguably under-served as Eléonore, the unwitting third party in the love triangle, but then it is never really her film. Particularly strong among the supporting cast is Dennis Mpunga as Idriss, a local hotelier who offers Antoinette some beautifully phrased and performed support and advice. He really stand out in a film peppered with excellent minor characters.

The film makes excellent use of its beautiful scenery. Combined with the gentle pace and characterisation, it helps to bundle Antoinette into a warm and comforting treat. This is not a film to inspire belly laughs, but absolutely one to inspire constant, pleasant smiles. It is wonderful stuff – modest yet perfectly formed.