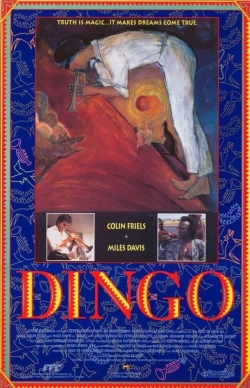 Rolf de Heer’s 1991 film drama Dingo opens on one of the boldest and most striking scenes in the history of Australian cinema. Children play on the street of an isolated Western Australian town, way out in the middle of the bush. Suddenly a 747 jet plane roars overhead, and makes an emergency landing at a local airfield. Out steps Miles Davis – perhaps the greatest post-war jazz musician in the world – and his band. They proceed to play a spirited jazz number. Then they climb back onboard, and the plane takes off towards the horizon. It is a profoundly original and deeply surreal way to begin an exceptional film.

Miles Davis has been dead for almost 30 years, and yet he remains a pivotal figure in the history of popular music. He was a pioneering and progressive jazz trumpeter, whose work ultimately transcended genre labels to make him an enormous iconic and beloved musical figure. Despite a long career in music, Davis only ever turned his hand to acting once – and he turned it in this small Australian drama. Dingo was not a commercial success, but three decades later it still stands up. This is an inventive, memorable, and absolutely charming feature film.

John “Dingo” Anderson (Colin Friels) is an avid trumpeter with career aspirations, whose life was changed when he saw musical legend Billy Cross (Davis) play on the local airfield as a child. While his community urge him to move on from his dream to professionally record a jazz album, Dingo remains dedicated to his goal – even when an old friend returns home with romantic designs on his wife.

There are many things to praise in Dingo – not in the least of which is Marc Rosenberg’s emotionally resonant and striking screenplay. It contrasts the urban cool of jazz music with the rough, sun-bleached isolation of outback Australia, and the plain-spoken bluntness of Australian culture with the refined style of musical performance. It is a superb story of contrasts: between two worlds, between cultures, and between aspirations and cold realities. Rosenberg’s script centres directly on Dingo himself, and opens him up the audience as an inspiring yet quixotic figure.

Rolf de Heer is a fabulous director to adapt that screenplay to the screen. He has a clear and expressive eye for the Australian landscape, and captures a small town atmosphere excellently. When the film develops and shifts, de Heer’s own visual presentation shifts with it. Wherever Dingo’s story takes him, his surroundings are evocatively captured.

Miles Davis is not working significantly from his own public persona, but he brings a sensational amount of presence and charisma with him. He died shortly after the film was released, and so never got the opportunity to act again. Here he makes his one role count: Australian cinema is rarely blessed with so stylish a co-star. While Davis stands out beautifully, it is overall Colin Friel’s movie. He creates a multi-dimensional, flawed human being out of his part. One can appreciate his failings while willing him to succeed. It’s not just uplifting to see a character pursue a dream so ardently; it is uplifting to see the struggle that his dream brings along with it and to see him do his best to overcome it.

1991 was a rock-solid year for Australian cinema, delivering the likes of Jocelyn Moorhouse’s Proof, John Ruane’s Death in Brunswick, and John Duigan’s Flirting. Dingo ranks right up alongside them. It is inspiring, funny, warm, serious, and wonderfully original. This is one gem that film lovers need to rediscover.