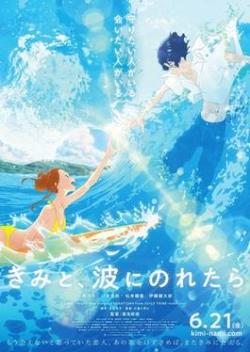 For some reason, anime director Masaaki Yuasa never gets quite the level of international acclaim as those for his contemporaries. Certainly it’s not for a lack of work. His debut feature Mindgame (2004) was a worthy cult hit, and subsequent works including The Night is Short, Walk on Girl (2017), Lu Over the Wall (2017), and Japan Sinks (2020) all showed off a strong talent with a strong visual aesthetic. Ride Your Wave (2019) was released between those last two films, and present the director at his most commercial and easy-to-enjoy level to date.

19 year-old Hinako Mukaimizu returns home to coastal Japan to surf and attend college. She soon meets two firefighters in quite succession: the polite, slightly clumsy Wasabi, and the courageous and dashing Minato. Hinako begins to date Minato, and teaching him to surf, when a sudden tragedy rips him from her life. She soon discovers that he is perhaps not as lost as she had assumed.

Ride Your Wave‘s seaside setting and supernatural water phenomenon reflect Yuasa’s earlier work in Lu Over the Wall, and this does diminish the film just a little bit. The territory feels just a little too overly familiar, whereas that earlier work felt so refreshingly distinctive. It does not help when what is original to Ride Your Wave feels fairly derivative of other anime tropes and traditions. It is not difficult to see where the film is headed before it gets there, and there are not that many questions in the plot that cannot be answered by anyone with a passing familiarity with anime.

Thankfully things seem much more accomplished when it comes to the film’s characters: primarily in Hinako’s growing emotional conflict, but also in Minato’s dour younger sister Yoko. They are enjoyable characters with whom to share time.

It really is the art and design work that stands out. Yuasa has a keen visual eye, and a hugely distinctive aesthetic. Ride Your Wave has a bold use of colour and contrast, and tremendous ingenuity in how each scene is framed and animated. It also handles all manner of natural and difficult-to-animate phenomena including surf, snow, and fire. The film also boasts an excellent musical score by Michiru Oshima (Fullmetal Alchemist), and with a core original sing from musical outfit Generations from Exile Tribe that is thankfully quite enjoyable given how often it is used throughout the film.

I have no doubt that Masaaki Yuasa’s career-making blockbuster is yet to come. He is a prolific director with a unique visual style and a strong talent for design. It is all a matter of content: some of his films have been too escoteric for the mainstream, while others – like Ride Your Wave – seem too generic and familiar to fully inspire a mass audience. There is clearly a sweet spot somewhere in the middle, and it is going to be something very special when Yuasa manages to find it.