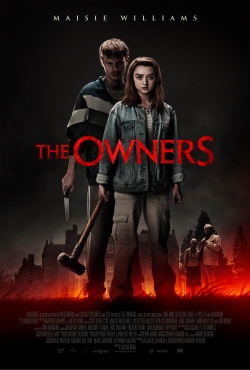 They can’t all be winners. Despite the presence of cult favourite Maisie Williams (Games of Thrones) and Sylvester McCoy (Doctor Who), Julius Berg’s home invasion thriller The Owners is less of a movie and more of a chore. With the plethora of tightly-made low budget cinema available these days, there is honestly no need to ever watch this film.

A group of young thieves – and one unwilling girlfriend (Maisie Williams) – break into the home of a doctor (Sylvester McCoy) and his wife. When they cannot open the safe in the cellar, they lie in wait until the elderly couple return. What they expect to be a simple act of coercion turns into a night of terror when the couple unexpectedly turn the tables.

Home invasion narratives are always packed with opportunities for rising tension: the claustrophobic settings, the sense of hitting close to home, and the powderkeg of desperate characters trapped together for 90 minutes all contribute to that effect. They also bring with them considerable challenges. It is a crowded little genre, and gets busier every year as more filmmakers add their own attempts to the pile. The Owners feels an awful lot like Fede Álvarez’s 2016 thriller Don’t Breathe, in which a few young thieves broke into a blind veteran’s house to rob him – only to get ambushed by him in return. As The Owners unfolds it begins to resemble a few other film as well; revealing which ones would spoil the story. It is suffice to say that the film feels more like a remix of other works than an achievement of its own.

Generally speaking that is not a huge problem. Plenty of films overtly reference or take inspiration from earlier works. Indeed, this is generally how art works. Where the problem arises is in the messy and obscured manner in with Berg’s story unfolds. Shock twists and turns are not articulated very well, and the odd tone of the film’s second half jars badly against the first. There are also issues with pacing. Scenes drag out far too often and test one’s patience. The film is only 92 minutes long as well, suggesting the problem lies not simply in a poor pace but a limited story as well. A few technical issues harm the film as well. The sound seems to get oddly muddy from time to time, while an unexplained shift in aspect ratio during the third act comes out of nowhere and lacks any sort of rationale.

The actors do their best: Maisie Williams is very good, while Sylvester McCoy performs with the same distinctive cadence and brogue that lead viewers to love or hate him. Co-star Jake Curran is particularly effective as Gaz, a violent thug who feels both terrifying and utterly believable.

This is Berg’s first feature, and in his defence one can see his creative potential. The actors are well directed, and he is clearly capable of shooting some genuinely flinch-inducing moments of violence. With the benefit of experience, his next feature could be great. The Owners, however, is not.