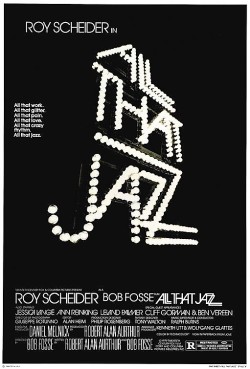 Biographical pictures are a dime a dozen in Hollywood; much less common is the autobiographical picture, in which a filmmaker adapts events of their own lives. It must require a major ego to film one’s own life for a paying audience. Thankfully director and choreographer Bob Fosse had immense talent to match when he co-wrote and directed All That Jazz in 1979.

There is a thin veneer of fiction draped over Fosse’s film. It replaces the director with Joe Gideon (Roy Scheider), a stage and film director trying to balance editing a feature film titled The Stand-Up while directing the stage musical NY/LA. He lives his life on a constant high of womanising, self-medication, and chain-smoking cigarettes. He is fighting his producers on the musical’s creative direction and struggling to find satisfaction with his film’s edit. When he suffers a stress-induced heart attack, Gideon is warned to curtail his non-stop lifestyle if he wants to go on living. While Gideon is made up, his life is not – only for Fosse the film being edited was Lenny and the Broadway show was Chicago. The heart attack was real.

It takes an enormous ego to write and direct a film almost entirely about yourself, but it also takes great humility to do so with a film that does not deify or forgive poor behaviours. Gideon is an absolute mess of a human being, burning the proverbial candle at both ends, and treating those close to him in an appalling fashion. His self-destructive urges become painful to watch in places. Every terrible life choice seems primed to make the audience flinch. It is not just up to the audience to judge him: a series of dream sequences see Gideon attempt to justify or regret his choices to a patient and enigmatic angel of death (Jessica Lange). This non-realist presentation, positioned somewhere between theatricality and fantasy, starts early and continues through the film. It is a very bold way to present the story to an American audience typically hooked on realism.

Roy Scheider is superb as Gideon. He has a physicality and an energy that you simply do not see in his earlier or later performances, and his flamboyant sexuality here feels worlds apart from his more grounded and famous roles in The French Connection, Jaws, and the like. Through Gideon’s journey he is supported by three women: his ex-wife, current girlfriend, and daughter. They make an obvious maiden-mother-crone ensemble, but each character is given room and time to develop independently and all three are wonderfully performed by Leland Palmer, Ann Reinking, and Erzsébet Földi.

You cannot talk about All That Jazz without mentioning the editing. The entire picture is cut sharply and with a particular sense of rhythm. Every beat is crisp, and every corresponding cut is razor-sharp. You can tell its writer/director has a background in musical theatre. Both from one scene to another and moment-to-moment the film effectively has a perfect pace. Not a scene is wasted. Nothing feels too short or abrupt.

It is a rare joy to be able to write this, but All That Jazz is essentially a perfect film. It is perfectly staged, and powerfully expressed. In terms of technique and skill is almost entirely faultless. It has been more than 40 years since its original release and yet it still feels absolutely vital. This is one of the greatest American films ever made.