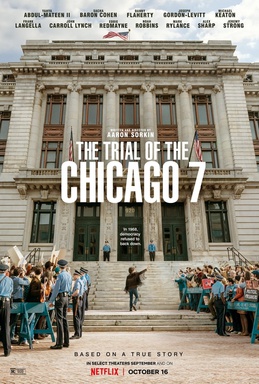 In 1968 anti-Vietnam and counter-culture protests, timed to coincide with the Democratic National Convention, were met with heavy violence from the Chicago police. Eight activists were arrested and charged with conspiracy and crossing state lines to incite a riot. Their ensuing trial was a controversial and historically critical event in 20th century history. The activists were referred to as the “Chicago Eight” and then, after one defendant’s case was declared a mistrial, the “Chicago Seven”. The story has attracted more than a dozen films in the decades since, either directly or obliquely. Last year Netflix released yet another: Aaron Sorkin’s The Trial of the Chicago 7.

It is absolutely the safest territory imaginable for Sorkin, a playwright turned film/TV writer, whose writing is almost always dialogue-heavy and aggressively polemical. It is Sorkin who wrote Sports Night, a comedy that was actually a two-season lecture on ethics. He most famously created and wrote the first four seasons of The West Wing, a love letter to American democracy disguised as a workplace drama. His film scripts, including Molly’s Game, Malice, A Few Good Men, Moneyball, and Steve Jobs, vary in content but not in form: they are all smart, people in them argue a lot, and sooner or later a character is going to make a stand and deliver an angry lecture. If you do not enjoy his overt left-wing, paternal, and literary sensibilities, every Sorkin film or TV series ever made is going to grate like a self-important fingernail on a blackboard.

Personally? I adore his sensibilities, and his superbly theatrical turn of phrase. I am so impressed with his writing talent that I will actively defend his widely pilloried one-season drama Studio 60 on the Sunset Strip. That is the extent to which I have drunk the Aaron Sorkin ‘Kool-aid’. His style simply sings to me. The Trial of the Chicago 7 is a two-hour courtroom drama in which innocent men are put on a criminal trial for a political purpose – you simply could not develop a more Sorkinesque setting and story.

For the second time Sorkin both writes and directs, and the result is a much stronger and self-confident effort than his oddly repetitive and irritating directorial debut Molly’s Game. The screenplay juggles a broad spread of characters, and both balances and showcases each so that the film never becomes bogged-down or confusing. In those roles he has assembled an absolute all-star cast of talented actors, often playing quite firmly against type. They are uniformly excellent. More than a few of them are awards-worthy.

Particularly effective is English actor Eddie Redmayne as activist Tom Hayden. I have not been a fan of Redmayne’s to date, finding his peformances much too self-conscious and theatrical to suit the bulk of his roles. Here he plays Hayden with a much better sense of control, and actively underplays the character’s emotional turmoil. It feels a minor revelation to see him perform the role with such subtlety. Also deeply impressive are Sacha Baron Cohen as Abbie Hoffman, Jeremy Strong as Jerry Rubin, Mark Rylance as defence lawyer William Kunstler, and Yahya Abdul-Mateen II as Bobby Seale.

Frank Langella delivers a jaw-dropping performance as Judge Julius Hoffman, who presides over the Chicago Seven trial with a growing absurdity that would seem farcical had it not actually happened. His perverse rulings, constant charges of contempt of court, and bald-faced racism provides most of the film’s most shocking and disturbing moments. Aaron Sorkin does a superb balancing act in writing and directing the character: genuinely funny when he needs to be, and absolutely horrifying when he has to be.

This is a strong, powerful, and rather timely drama. With the USA only just emerging from four years of post-truth, far right-wing government, it feels very much a reflection of our time. It marks Sorkin’s positive progression as a director. As a writer, it is arguably his best film work since A Few Good Men. This is one of 2020’s finest screen dramas.