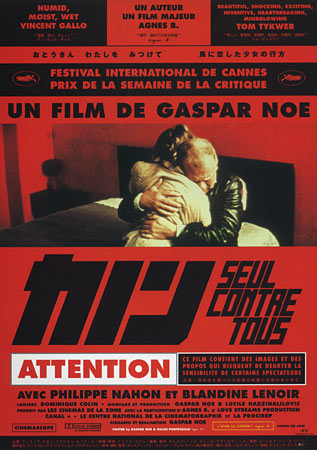 An unemployed, nameless horse butcher (Philippe Nahon) living in northern France violently assaults his wife, steals a gun, and makes his way home to Paris – where he plans his revenge against a society that has left him feel alone and abandoned.

Seven years after his extended short Carne introduced the world to the deeply unpleasant horse butcher, Gaspar Noé directed his first feature I Am Alone. The film picks up the events from where they had been left, and provides a harshly provocative protrayal of a man suffering from runaway rage and dangerous psychological delusions. It further cements Noé’s directorial style – full of confronting violence, nihilism, and a perverse comedic streak – and offers up a clear road map for the remainder of his career to date. The French New Extremity was a hotly debated movement in European cinema, critically both applauded and reviled, and no one has a greater claim to the movement’s centre than Noé. This is attention-grabbing, repulsive, vital cinema.

There are essentially two acts of violence in I Stand Alone; both of them utterly repugnant. In between the film marinates in the threat of violence. Changes in scene or perspective are marked out with whiplash camera movements and the reverberating sound of gunshots. The horse butcher’s inner monologue is a near-constant feature and comes packed with loathing, threats, and fantasies of assault and murder. Nahon maintains a brutish and aggressively physical presence throughout, to such a pummelling effect that in rare moments of self-awareness and regret he punctures right through the movie. It is hard stuff to sit through, but at the same time it is enormously effective. He is loathsome, but he is also viscerally fascinating.

It is a short film, running to about 81 minutes – quite frankly I am unsure an audience could bear for it to be much longer. From beginning to end it is too violent, too repellent, too pompous, and frustratingly difficult in setting a tone. Before the climax, an on-screen title warns the audience it has 30 seconds to flee the theatre. It is a wonderfully pretentious moment from Noé, because of course no one will be going anywhere. It is too great a temptation to stay and rubberneck the emotional wreckage, and enjoy the viciously unenjoyable.

Noé has since directed several morally challenging films, some of which – Irreversible and Climax in particular – are vastly superior in terms of content and technique. I Stand Alone really is the kick-off point, however, and a loud shout from the rooftops of what Noé’s contributions to French cinema are going to be like.