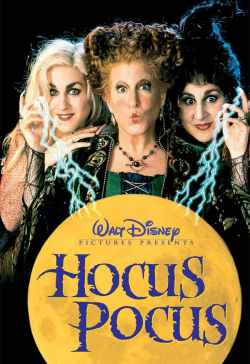 With the various coronavirus lockdowns and restrictions keeping many cinemas around the world shut, Hollywood’s various studios and distributors have been understandable reluctant to release many films in 2020. Those cinemas that have remained open, however, have struggled with a lack of product. This has led to a lot of archival and beloved old features getting brushed off and re-released on the big screen. One of the most popular features brought back in this vein has been Hocus Pocus, a dark comedic fantasy made for Walt Disney Pictures back in 1993. Quite why it has succeeded seems a mystery at first: it’s 27-years-old, and was not even profitable when released theatrically the first time.

Hocus Pocus is, of course, one of those perennial films for children. While it failed in cinemas, it was eagerly lapped up on home video. Its broadcasts over the years on television – particularly on the USA’s Disney Channel – have been increasingly popular. Now, seventeen years after its original release, the film is more popular than ever.

On Halloween night in 1693 Salem, the three Sanderson sisters – Winifred (Bette Midler), Mary (Kathy Najimy), and Sarah (Sarah Jessica Parker) – are lynched by the townsfolk in revenge for their killing of a small child. 300 years later, they are accidentally brought back to life by teenager Max Dennison (Omri Katz) and seek to re-start their murderous ways.

The film is very effectively directed by the underrated Kenny Ortega, whose directorial works (including Newsies and the High School Musical trilogy) and choreography efforts (Dirty Dancing, Ferris Bueller’s Day Off) have gone largely ignored by everyone except his target market. He is a director with a strong sense of what will amuse and thrill his audience, and in this case a finely tuned idea of just how horrific the horror elements can be. He is a good fit for Walt Disney Pictures, pushing the darker elements of this film to the point where they are almost unsuitable for young viewers. The film’s first 10 minutes include four violent on-screen deaths, including the murder of a child. Later sequences regularly put its teenage cast into mortal peril, all the while blending in a good measure of humour. Basically it’s par for the course for live-action Disney.

A lot of that humour is generated by the three leads: Bette Midler, Kathy Najimy, and Sarah Jessica Parker. They each boast superb comic timing, and a theatrical delivery that allows their characters to do quite frightening things without ever actually seeming that scary. Each actor is also beautifully costumed by designer Mary Vogt, who uses a wonderful variety of colour to bring the characters to life. Other performances feel solid rather than strong, including Omri Katz and Vinessa Shaw as a pair of desperate high schoolers trying to defeat the witches as well as Doug Jones as a comedic zombie from the 17th century – in Jones’ defence, there isn’t a great amount for him to do. One surprise highlight is Thora Birch as Max’s younger sister – she has charm and comedy value to spare.

Critics turned their noses up at the film in 1993, but I really feel they missed the mark. For its target audience of children and young teenagers, this Halloween blend of comedy, fantasy, and mild horror is wonderfully effective.