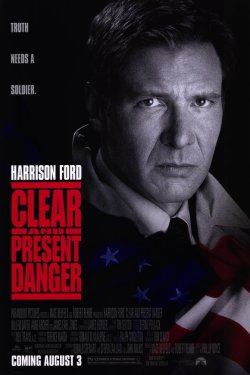 Tom Clancy was a hugely successful author, combining military action and political intrigue in a long series of novels – mostly featuring protagonist Jack Ryan. Their popularity naturally led to Hollywood knocking on Clancy’s door; the first result was John McTiernan’s exceptional film adaptation of The Hunt for Red October (1990) and, in due course, Phillip Noyce’s Patriot Games (1992). After another two years, Noyce returned with Clear and Present Danger (1994) – easily the most complex adaptation of the three.

When a close friend of the US President (Donald Moffat) is executed by members of a Colombian drug cartel, he declares a covert and illegal war on the cartel responsible. Jack Ryan (Harrison Ford), recently appointed deputy director of the CIA, finds himself in the centre of a cover-up and under attack from both sides of the conflict.

Clancy’s 1989 novel of the same name is a near 700-page work, packed with multiple plot threads and a wide array of plot-critical characters. Unlike the cat-and-mouse submarine chase of The Hunt for Red October or the revenge storyline of Patriot Games, Clear and Present Danger covers a far more political and complicated set-up. It is not as intuitively suited to a film adaptation. One of the most telling parts of this third film is that, despite visible effort to streamline the plot and increase Jack Ryan’s presence in it, there are too many important characters to understand and too much story to burn through over two-and-a-half hours.

Plot suffocates the film. Simply too much happens, and while the writing team (John Milius, Donald E. Stewart, and Steven Zaillian receive an on-screen credit) successfully make it easy to follow it fills out the running time to the detriment of everything else. There is no room to breathe. There are precious few moments when the stakes are really appreciated. Nobody – and I genuinely mean not one character – gets the time to be fleshed out and made realistic. Heroes are noble and heroic, and villains are deceptive and amoral, and there are no layers of grey to be found despite plenty of opportunity. Indeed, the events of the film demand more depth and ambiguity – much, much more than it gets.

Technically the film is excellent, and fans of military action and intrigue will likely have a ball. The actors acquit themselves well across the board, despite a paucity of material. For some, including Willem Dafoe, Joaquim de Almeidam and Henry Czerny, they manage to find small corners and moments to flesh something out. For actors like Harrison Ford, the lack of good script material leaves a vacancy that they fail to fill. For Ford it means acting according to typecast: it is the standard, growling middle-aged Ford, prone to grabbing other men by the collar and shouting at them with a righteous sense of outrage.

Clear and Present Danger really is one of those frustrating movies that are entertaining, and indeed reasonably good – but the potential is there to be great. It is a cautious punt at the ball when by all rights everyone involved should be swinging for the fences.