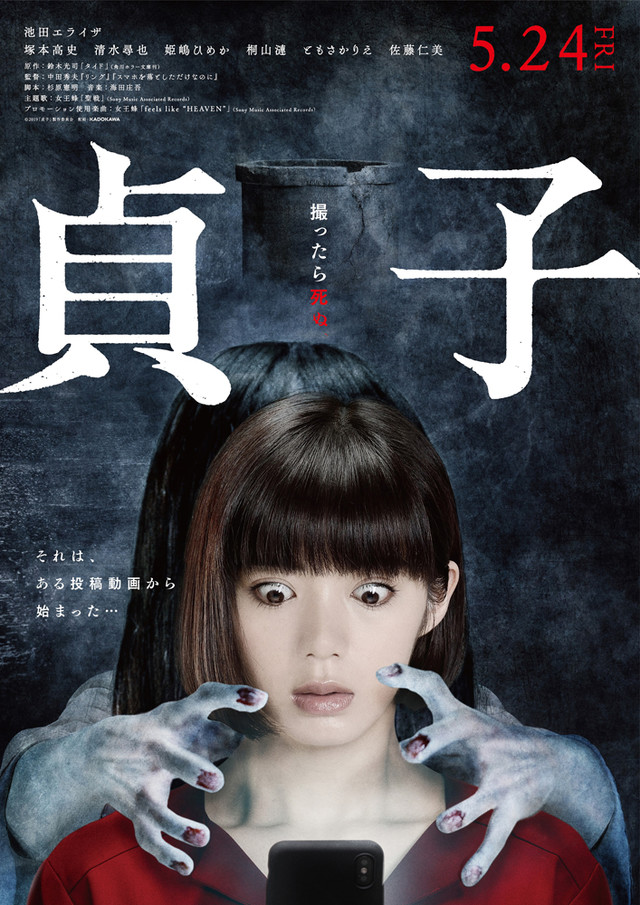 Horror films seem to lend themselves to franchises, as audiences crave to revisit the monsters and villains that entertained them so much in the earlier instalments. There is more often than not a gradual drop in quality as these franchises linger on as well: Freddy’s Dead: The Final Nightmare is not a patch on A Nightmare on Elm Street, for example, nor is Friday the 13th Part VIII: Jason Takes Manhattan anywhere near as effective as the original Friday. Neither trend is exclusive to the USA either as evidenced by Sadako (2019), the most recent follow-up to Japanese director Hideo Nakata’s legendary 1998 thriller Ring.

There have been twelve Ring feature films in all, including one in South Korea and three in the USA. The remaining eight have all been Japanese, and have followed an odd narrative trajectory to say the least. In 1998 there was Nakata’s Ring, based on Koji Suzuki’s popular novel, and in the same double-bill there was also Joji Iida’s Spiral, based on Suzuki’s sequel novel of the same name. While Ring was a sizeable hit, Spiral was not. It was ignored and replaced by Ring 2 in 1999, with Hideo Nakata returning to direct. Suzuki’s third Ring novel Loop was not adapted, however, in favour of the short story “Birthday” in the film prequel Ring 0 (2000).

For a while that was essentially it for the Japanese Ring franchise, until the popularity of 3D cinema led the Kadokawa film studio to make Sadako 3D (2012), based on Suzuki’s later novel S even though Loop had never been adapted. It also followed canonically from the previously-ignored Spiral. Its director Tsutomu Hanabusa also directed Sadako 2 3D (2013). Koji Shiraishi’s Sadako vs Kayako followed three years later, and formed a mediocre crossover between Ring and Ju-On: The Grudge. It didn’t seem to directly act as a sequel to anything. That leaves Hideo Nakata to return to Ring one more time with 2019’s Sadako, which ignores previous Sadako films and acts as a direct sequel to Ring 2 instead. It is something of a giveaway that, despite the overwhelming international success of Ring 20 years ago, not one of the last four Ring sequels have really gained anything in the way of a release outside of East Asia. As noted above, and like almost all films in long-running horror franchises, Sadako is a car running on fumes. The iconic imagery of the original, combining modern technology and Japanese folklore, is over-familiar and increasingly ineffective. Its ability to shock is diminished. Its well of story potential has run dry. A brief synopsis, for what it is worth: after almost being murdered by her mother, a young girl is taken to hospital and put in the care of psychologist Mayu Akikawa (Elaiza Ikeda). At the same time Mayu’s brother Kazuma (Hiroya Shimizu) goes missing after recording a YouTube video at the site of the attempted murder. You may notice the ghostly spirit Sadako – central to the Ring series – does not score a mention. She is involved, and does appear, but has probably the smallest premise here of the whole series. Instead an interminable amount of time is spent looking for Kazuma, and investigating the young girl, and discovering the link between girl, disappearance, and Sadako herself in a coastal cave system linked to religious worship. Storywise, it is absolutely one red-hot mess, and for whatever reason Nakata elects not to populate his new horror movie with much horror at all. In terms of style, Sadako largely feels rather ordinary and banal. In the original Ring this worked brilliantly, with the uncanny presence of the cursed videotape puncturing the comparatively ordinary life environment of suburban Tokyo. Here, once starved of supernatural jumps and scares, it simply feels ordinary. This very much feels like Nakata’s Prometheus: just as Ridley Scott proved you can rarely revisit past work successfully when tried to follow Alien, so Nakata attempts to restart the Ring saga and fails. Performances are, for the most part, perfunctory. The technical quality lends the film a cheap air, plus a woolly edit makes everything feel just slightly too confusing to work. A key character from Ring and Ring 2 does return – but unless you are highly familiar with a 20 year-old film it is unlikely you will recognise them. At the time of writing, Sadako is not easily accessible to English-speaking audiences. There is a DVD with subtitles released in Hong Kong, but there has been no western release either on physical media or a streaming service. Take that as a warning: this film isn’t good enough to travel.