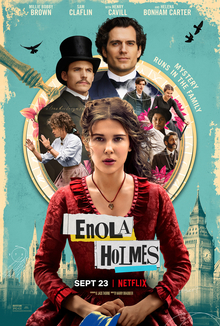 In a world experiencing a widespread viral outbreak, and with most cinemas closed and scheduled releases delayed, it has been a hard year for audiences seeking popular big-screen entertainment. Thankfully Netflix has been taking great advantage of the ‘new normal’, releasing a steady stream of glossy feature films that not only fill the niche but successfully scratch our collective itch as well. Enola Holmes, directed by Harry Bradbeer and based on a novel by Nancy Springer, is the fun Summer blockbuster that the coronavirus has otherwise denied us.

Enola (Millie Bobby Brown) is the 16 year-old sister of the famed English detective Sherlock Holmes (Henry Cavill). When her mother (Helena Bonham Carter) vanishes without a trace – and with her eldest brother Mycroft (Sam Claflin) intent on sending her to boarding school – Enola runs away from home and finds herself mixed up in a murder plot against a young Viscount (Louis Partridge) on the verge of inheriting his estate.

Nancy Springer has authored an entire series of Enola Holmes novels, and this feature adaptation absolutely feels like the first of several adventures rather than a self-contained work. I genuinely hope that’s true: this is a broadly appealing and funny adventure film that I would happily see revisited two or three times in the next few years. It is wonderfully self-aware – there’s a lot of direct address by Enola to her audience – and moves at a brisk and breezy pace. In a year where the collective mood has been understandably low, Enola Holmes is exactly the light-hearted distraction that we need.

It is not a surprise, given the direct address, that director Harry Bradbeer comes to the film from his award-winning work on the television series Fleabag. That series made the audience a co-conspirator in its lead’s escapades through breaking the fourth wall – the technique works equally well here. We are not watching a fun adventure so much as going on it alongside the heroine.

The film also presents a refreshing take on the Sherlock Holmes character and mythos. It gives him a more extended family than creator Arthur Conan Doyle ever afforded him, and presents the famous detective at what seems a very early – not to mention Watson-free – stage in his career. Henry Cavill plays this less irritable than usual version of the character very well. Sam Claflin is also excellent as Sherlock’s older brother Mycroft. Helena Bonham Carter is a predictable delight as their mother Eudoria, although due to her vanishing role in the story there is precious little of her to see – another reason to hope for Enola’s on-screen adventures to continue. Eudoria’s secret activites, which seem to involve the suffragette movement of the time, give the story a nice sense of feminism and political complexity. It’s not deep, but it’s deeper than audiences might expect.

As the titular lead, Millie Bobby Brown completely escapes her famous role as Eleven in the Netflix series Stranger Things and firmly establishes herself as a capable lead actor. She absolutely nails the tone of the film, and goes the greatest length to establish its sense of whimsical humour. She creates a fantastically likeable protagonist, and I hope this is just the beginning of a long career in film and television.

One thing very much noting of this new iteration of Holmes is the sizeable debt it owes to Guy Ritchie’s two Sherlock Holmes features directed for Warner Bros. Like those adaptations, which significantly upped both the tone and the level of physical combat, Enola Holmes is a fast-moving and surprisingly action-heavy work. The level of peril, and Enola’s own martial arts prowess, are far more pronounced that one might expect from a film mostly aimed at young teens. It works wonderfully, and manages to always stay just on the right side of appropriate (there is an attempted drowning that draws the moment out a little too much for younger viewers, but it quickly rights itself). Enola’s investigative thought processes are worked out visually, much like they were for Robert Downey Jr’s Sherlock in Ritchie’s films.

This is a summer blockbuster where everything is working as it should: beautiful costumes, pleasing production design, knowing performances, and a splendid musical score by the ever-impressive Daniel Pemberton.

While the core mystery of the film is not entirely successful (there must be a better way of protecting the rights of working men and women than saving an aristocrat) the characters, humour, and the hugely enjoyable take on a familiar mythos make Enola Holmes a genuine delight. Netflix: more, please.