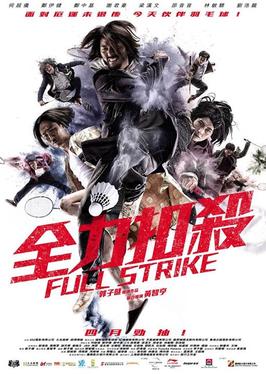 Ng Kau-Sau (Josie Ho) was a champion badminton player, but her poor attitude and aggressive style saw her career shattered. Now she’s overweight, depressed and working in her brother’s restaurant – until a chance encounter involving a meteorite and a homeless man leads her to a run-down badminton academy run by three ex-criminals looking to make a change in their lives.

Back in 2010 I was a huge fan of Derek Kwok and Clement Cheng’s kung fu sports comedy Gallants – so much so that it wound up being one of my favourite Hong Kong films of the past decade. Five years later Kwok returned to the sports comedy genre with Full Strike, co-directed with Henri Wong. While it does not hit the incredible heights managed by Gallants, it is a hugely entertaining film. The cast are great, the jokes are great, and despite being a fairly stereotypical ‘misfits win the championship against the odds’ story it still manages to find plenty of places for originality and unexpected angles on the material.

The film falls comfortably into Hong Kong’s distinctive ‘mo lei tau’ genre, a form of nonsensical comedy driven by actor/director Stephen Chow (Shaolin Soccer, Kung Fu Hustle). The jokes come frequently, and they take the form of unexpected shifts in tone, contrasts between action and dialogue and simple unpredictability. It is surprising to see just how good stars Josie Ho and Ekin Cheng are at this sort of humour. I generally associate Cheng with glossy action vehicles like Young & Dangerous and The Storm Riders; seeing him play this kind of well-timed broad comedy was a wonderful surprise. Cheng plays Lau Dan, the leader of a recently released gang of thieves. All three have seen better days: Lau is partially deaf, Lam Chiu (Edmund Leong) is going blind, and Ma Kun (Wilfred Lau) is missing a hand. Despite this, and despite society thinking of them as undesirables, they are intent on becoming badminton champions.

Their coach, former champion Chik (Andrew Lam) is one of the film’s highlights: a rambling eccentric and alcoholic, he spends one half of the film projectile vomiting and the other half making ridiculous claims about his own life. Another great comedic asset is Ronald Cheng as the preposterously named Suck Nipple Cheung, Kau-Sau’s ultra-competitive cousin. Tse Kwan-Ho is hilarious as Kau-Sau’s obscenity-laded brother Kau-Chun, whose angry shouts of ‘Fuck your tits!’ to every obstacle regardless of gender seem to be the film’s most oft-repeated line.

It is an imperfect film. The humour slips a little during the film’s extended climax, right when it should be at its funniest. On the other hand it does make some unexpected story choices that help it stand out from the crowd by the final scenes. It also has a strong sense of place: while the climax occurs in Macau, the bulk of the film takes place in the New Territories backwater of Yuen Long. It is also extensively performed in Hakka rather than Cantonese – another striking detail.

While not as accomplished as Gallants, Full Strike is a very enjoyable companion piece. It’s a little weird, regularly very funny and ultimately just great entertainment. I’m generally a sucker for sports movies; this comfortably scratches that itch.