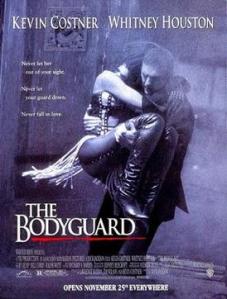 Frank Farmer (Kevin Costner) is a retired secret service agent turned bodyguard, who is hired to protect pop star Rachel Marron (Whitney Houston) after threats are made against her life. Despite growing friction, circumstances draw them together – compromising both of their lives in the process.

The Bodyguard, from writer Lawrence Kasdan and director Mick Jackson, is an early 1990s cultural touchstone. The film itself was the second-highest grossing picture of 1992, while it’s famous soundtrack – led by Houston’s chart-topper “I Will Always Love You” – remains the best-selling movie soundtrack of all time. It captured both stars at the very peak of their popularity, and is fondly remembered by its many fans decades after the fact.

Of course the truth is that The Bodyguard is not that great a film. It is no catastrophe; that, at least, is for sure. When watching it some 28 years after the fact one can certainly see why it was so popular and successful at the time. At the same time it is not hard to notice the weak plotting, or the sometimes trite dialogue, or Houston’s relatively insipid performance (she improved in later films). Despite its flaws, it is perfectly watchable. In a sense it feels like a time capsule of the age in which it was made, when Houston was a clean-cut and immensely popular singer and Kevin Costner had yet to make Waterworld or The Postman.

For Costner’s part, he is great: Frank is a straight-forward and simple character, but Costner adds a depth and a resonance that Kasdan’s screenplay (his first, delayed for many years) fails to provide. Costner remains a particularly underrated actor, and The Bodyguard is a perfect example of why he comes across so authentically in the bulk of his roles. Few actors are as skilled at playing the everyperson.

He has his work cut out for him, as Frank is a terrible bodyguard. For one thing, he sleeps with his client and gets romantically involved. My terrible memory of seeing the film on release with that it was a romance that both characters ease into. Instead it’s an obvious and clumsy one-night stand followed by weeks of regret and bitter recriminations. The film is also weirdly obsessed with scenes of Frank drinking orange juice. There is one scene – in which Frank is confronted in a kitchen by an angry security consultant – that manages to give his character some proper strength and which shows without telling. It is also hands-down the finest scene of the entire film.

The storyline rapidly descends into unlikely silliness, with ridiculous twists and an unconvincing climax. It all ends with Whitney Houston’s cover rendition of Dolly Parton’s “I Will Always Love You”. To be honest, I suspect the song is half of the reason that the film was so successful.

If you have never seen The Bodyguard, it is not exactly begging to be seen. If you saw it in the past, and were one of the people who really loved it, hey; you do you. It is certainly not the worst hit film in Hollywood’s history. Indeed, it is far from it – just a little ordinary.