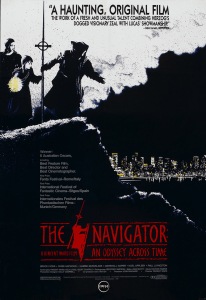 In a 14th century Cumbrian village the people are fearful of the fast-approaching Black Death, and rely upon a boy named Griffin (Hamish McFarlane) to ensure their safety. Cursed with dream-like visions, Griffin foresees a group of villagers will travel to a distant city on a pilgrimage to place their holy cross atop its highest church tower. He also foresees that one of their number will die before their journey ends.

Vincent Ward’s artful 1988 fantasy The Navigator: A Medieval Odyssey is an Australian/New Zealander co-production, and one of the most striking and memorable features ever produced in either nation. It is a somewhat challenging film, but I think a rewarding one too.

Ostensibly there is a clear story here, in which a group of pilgrims make a fantastical journey through a tunnel dug from one side of the world to the other and to an anonymous present-day city. In practice that story is aggressively obfuscated. Ward takes the pilgrims’ point of view, turning a modern technological city into a brilliantly lit city of angels and miracles that comes packed with steel beasts and monsters at every turn. The characters do not fully understand what is going on, and so – somewhat appropriately – the audience do not fully understand either. Whether this is a clever or maddeningly technique is ultimately down to the individual viewer.

Foregrounded ahead of the narrative is Ward’s profoundly beautiful aesthetic. Shot in a combination of colour and black-and-white, The Navigator flows with stunning imagery and photography. The 14th century is a starkly monochromatic world that reflects both the snow-covered wintry setting and the harsh life-or-death peril in which the plague-threatened villagers find themselves. By deliberate contrast, the 20th century city is filled with light and colour. It provides a fantastical air that reflects the mind-sets of the characters, as well as a narrative purpose that only becomes clear as the film progresses.

The film is largely cast with unknowns, including Hamish McFarlane as the titular navigator Griffin and Bruce Lyons as his protective older brother Connor. One face very familiar to Australian viewers is Paul Livingston as fellow villager Martin; with Livingston having made such an indelible impression on television viewers over the years as his comic alter-ego Flacco, the character is occasionally hard to take seriously. In all honesty, however, there is not a poor performance across the board.

The Navigator is a distinctive and original film, and should be celebrated for that, but at the same it comes steeped in enough superstition, mysticism, and religious fervour to turn off some elements of the audience. Later story choices may infuriate some viewers as well, almost guaranteeing it a divisive reputation. Those who favour good stories told well may be unsatisfied. Those who luxuriate in tone and aesthetic will feel more rewarded. As I said: it is a challenging film – but it can feel rewarding as well. No one is right or wrong; it is up to you.