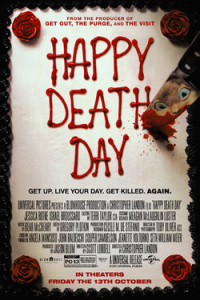 University student “Tree” Gelbman (Jessica Rothe) wakes up from a drunken night partying only to find herself trapped in a time loop. The same things happen to her every day, and no matter what else she manages to change her day always ends the same way: at some point that night, a masked killer will murder her.

You only really need one fresh idea to invigorate an otherwise tired genre picture, and Happy Death Day scores a winner with its light-hearted and pacy riff on 1990s hit Groundhog Day. A young woman being stalked by a masked killer through a university campus is a tremendously worn basis for a film, but what if the killer succeeded? What, then, if the victim wakes up to re-live the day all over again? What if her goal is not to escape the killer, but instead to solve her own murder? It is a great concept that lifts Happy Death Day from a tired chore into an enjoyable slice of pulp entertainment. It is not going to linger too hard in the memory once it is gone, but it is a fun ride while it lasts.

Jessica Rothe carries the bulk of the film, since she is in every scene. She is also required to begin the film as a relatively unpleasant character: a proud member of a sorority, obsessed with her looks, judgemental of others, and fairly cruel in arbitrary ways. She gets a broad character arc as the film goes on, and has a good handle on balancing the scary scenes with the comedic ones. She is also given a large amount of agency, as she dies and revives over and over. In a sense the film gets to have its cake and eat it too, since the time loop structure allows it to ascribe to genre convention while also making its heroine pro-active and comparatively smart.

This is an imperfect film, but it does play in interesting ways with genre tropes. The first assumption regarding Tree is that she is the classic ‘first victim’, designed to showcase the killer’s violent antics before a slasher film’s first act is even halfway through. That she continues to be the protagonist comes as something of a surprise. The film also makes some interesting choices regarding the killer’s true identity – while it does ultimately resort to stereotypes, it does some interesting work around the margins.

All this is to say that Happy Death Day is a reasonably good horror film and an undemanding good time. This will not appear on any genre enthusiast’s ‘year’s best’ list, or be remembered anywhere close to the league of the famous slasher franchises of the 1970s or 1980s, but if you have a hankering for a blend of startling jump moments and some half-decent comedy it is a worthwhile diversion. Certainly it marks a significant improvement for director Christopher Landon, whose previous work has included writing the increasingly tedious Paranormal Activity sequels. This time around he is working from a screenplay by comic book writer Scott Lobdell. In all honesty this might be close to Lobdell’s work as well.

Good, not great, but some times good is enough.