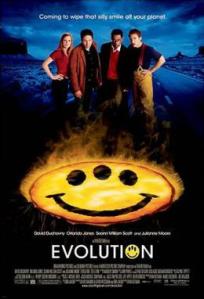 When a meteor hits the Earth near Glen Canyon, Arizona, it unleashes a rapidly changing alien menace – and only two community college professors, a government scientist, and a trainee firefighter stand in the way of humanity’s total annihilation.

Of course it was no such thing, losing money in cinemas and being pretty much immediately forgotten within weeks of release – save for a short-lived Saturday morning cartoon. I am not sure anybody really remembers that either. One could pose an argument that Evolution failed because its theatrical release came wedged between bigger and better films during the Summer of 2001, but in all honesty it is more likely to accept that it simply was not very good.

You can pretty easily divide Evolution by the acts of its story. The first and second acts are actually rather a lot of fun, with light-hearted performances and a premise that could easily have been played as a straight science fiction thriller (indeed the screenplay was originally drafted as a horror film). The third act, in which the story reaches its climax, staggers woefully and generally makes a terrible mess of what was up to that point a generally enjoyable throwaway confection. Any chance the film had of succeeding creatively and commercially are pretty much killed stone-dead.

It is a terrible shame, because the film includes a wonderfully talented cast, who collectively infuse as much entertainment into their roles as they can manage. It features David Duchovny – then still starring in TV drama The X Files – making a failed bid for movie stardom, and it’s genuinely sad that Evolution ultimately failed him. He has a great screen presence and a strong sense for comedy. Co-star Orlando Jones has spent his entire career failing to gain the accolades he deserves, and this film is no exception. He is a superb comic talent and helps enormously to make the first two-thirds of Evolution as enjoyable as they are. Seann William Scott is playing his traditional schtick; he has always been reasonably constrained in the roles he has been offered, but he acquits himself well. Julianne Moore is simply wasted in almost every respect: while Duchovny and Jones get to be funny with humorous dialogue, Moore’s opportunities stem from the script making her character clumsy. She is one of the USA’s absolute best actors, and time spent on a breezy, deeply-flawed comedy is time she could have spent on something genuinely good.

There are good ideas in Evolution. There are amusing performances, and an acceptable number of laughs, and even some rather clever pop science. The climax really does set fire to all of that, turning a passable diversion into a waste of the audience’s time. It’s a shame.