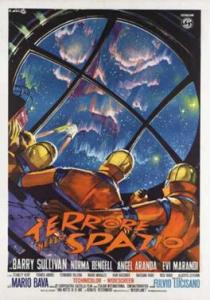 A mysterious signal leads two exploratory space vehicles to the fog-covered planet of Aura. While attempting to land one ship crashes with the loss of all hands, while the crew of the other start attacking one another while under some strange alien influence. When the surviving crew go to collect the bodies of the dead, they find them mysteriously gone without a trace.

Planet of the Vampires (1965) is a science fiction horror blend directed by Italian filmmaker Mario Bava. It is something of a cult icon in science fiction circles, partly because it is a particularly effective slice of low-budget pulp entertainment and partly because it is widely assumed to be source material for the much more famous 1979 science fiction horror film Alien. That last claim is a pretty obvious one to make, and easy to accept; it just takes a single viewing of each for the uncanny parallels to make themselves obvious.

Despite a limited production budget and severe language challenges – nearly every member of the core cast spoke a different language on set, and were dubbed into Italian or English in post-production – Planet of the Vampires is wonderfully stylish and entertaining. It has a distinct aesthetic to its sets and costumes, which feel both smart and broadly realistic for a 1960s space adventure. When the crew of the Argos begin to explore the surface of the alien planet Aura, it is captured entirely on a set with strong use of coloured lighting gels and smoke machines. It is cheaply made, but Bava and his crew innovative wonderfully to give it all a strong tone and atmosphere.

Perhaps the biggest surprise is that it is all played so straight. One expect a certain level of camp from a 1960s Italian science fiction film, where everyone is dressed in vinyl and the female characters are uniformly cast with attractive women. Instead every character brings a degree of professionalism and level-headed smarts that belie the film’s superficial appearance. As the Argos captain Markary, Barry Sullivan performs with a stony-faced resolve. Norma Bengell plays female crew member Sanya with some actual grit and agency – sadly her co-star Evi Marandi is still left with stereotypical hysterics as the story develops. At times, it must be noted, things almost feel too serious and dry for their own good – but altogether it is preferable to the alternative.

The horrific elements of the film feel genuinely unsettling, and have aged tremendously well. The presence of not one but two alien civilizations on the planet provide plenty of material for the film to work through. The co-opting of horror tropes of the ‘walking dead’ variety – pre-zombie, of course, given it pre-dates Romero’s The Night of the Living Dead by three years – is incredibly effective too. There is nothing particularly graphic or disturbing, but it remains incredibly creepy stuff. The plot also runs along at quite a pace, telling a proper three-act story but never out-staying its welcome.

Planet of the Vampires is a great side-note of cinema history: remembered and celebrated by a minority, ignored by the masses and by now half-forgotten – but it stands up well: exciting, dramatic, and tremendously inventive.