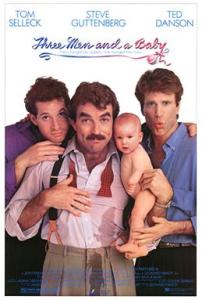 Three bachelors live together in a lavish New York apartment. While actor Jack Holden (Ted Danson) is shooting a film in Turkey, his baby Mary is left on the doorstep and flatmates Peter Mitchell (Tom Selleck) and Michael Kellam (Steve Guttenberg) are left to take care of her until his return.

Nothing dates like a mediocre comedy. Back in 1987 Three Men and a Baby was the biggest box office hit of the year, remaking an already successful French film and marking the non-Star Trek directing debut of actor Leonard Nimoy. The cast was popular too: Danson and Selleck the stars of hugely successful television series and Guttenberg coasting on the success of four Police Academy comedies and leading roles in Cocoon and Short Circuit. Reviews were broadly positive as well, making the film an unqualified success at the time.

That is very much ‘at the time’, as in truth Three Men and a Baby does not really stand up to scrutiny more than three decades later. It is broadly enjoyable for sure, and certainly a rather amiable experience, but there is no questioning that it is a mediocre experience: mediocre in a literal sense, where it does nothing terribly badly nor particularly well. It has some overly familiar laughs about single men not knowing how to change nappies, but nothing that surprises or particularly impresses.

The screenplay favours Selleck’s character above the others. Danson spends half of the film overseas, and Guttenberg is pressed into a comparatively bland sidekick in a supporting role. In many respects it feels as if it is the wrong way around: Guttenberg is likeable on-screen but never particularly funny, whereas Selleck’s much stronger talents could have made a highlight out of cartoonist Michael.

For a film made in the middle of the 1980s, there was always going to be a risk that Three Men and a Baby would indulge in some off-putting gender-based or homophobic attempts at humour. In a pleasant surprise it avoids that entire direction, instead throwing in a welcome joke mocking the idea that women are automatically capable of raising children and that men are fundamentally incompetent at it. It’s an angle that has ensured that, while not necessarily a laugh-a-minute comedy, the film remains at least broadly enjoyable. For those who were around to enjoy it on its theatrical release, it even stretches to a genuinely pleasant nostalgic diversion.

There is a funny game to play while watching the film: attempting to work out how an architect, a cartoonist, and a relatively unsuccessful actor could possibly afford the New York apartment in which they reside. It is comically massive.

As if often the case with 1980s comedies, the trials of raising a baby was clearly seen as insufficiently entertaining to support the whole film. Helping to prop it up is a preposterous and relatively nonsensical storyline about the baby’s arrival being confused with a heroin delivery and the three bachelors having to undertake some amateur policing to keep Mary safe and force the criminal dealers off their backs. It is the film at its least interesting, and indeed typical of the genre and the time.

Nimoy was a solid director, demonstrating a lot of promise but never quite developing into a top-level talent. Three Men and a Baby was far and away his most successful film. A sequel followed in 1990: Nimoy declined to return, with Three Men and a Little Lady being directed by Emile Ardolino (Dirty Dancing, Sister Act).