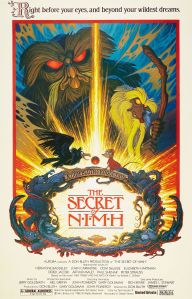 FictionMachine has spent the past few entries reviewing the animated films of director Don Bluth. After taking a fresh look at his final feature Titan AE, it is time to jump back and re-evaluate his first: the 1982 adaptation of Robert C. O’Brien’s children’s novel Mrs Frisby and the Rats of NIMH.

Mrs Brisby (her name changed for the film after toy manufacturer Frisbee objected) is a widowed mouse raising four children on her own. Her youngest child is critically ill and cannot be moved. With the farmer about to till his fields and Brisby’s home in the firing line, she must find the mysterious rats of NIMH to come to her aid.

The Secret of NIMH is a film with something to prove. Having loudly quit Walt Disney out of frustration with their declining quality, Don Bluth was out to demonstrate proper high-quality animation was still possible in America. Through the art, the animation, the special effects, and the background paintings, The Secret of NIMH positively swells with competitive pride. It is an angry young man of a feature; shaking its fist at older generations and demanding they move aside.

O’Brien’s original novel is a remarkably dark work for children’s literature. It puts its characters into genuine peril, and then undertakes a lengthy flashback based around laboratory rats being tortured and tested. Thankfully, as seen in his later features, Bluth is not a director to shy away from putting challenging material into a family film. While the laboratory flashback is heavily truncated, it does remain – and so do the life-and-death crises, lethal duels, and an overall unsettling, creepy tone. 1982 was an uneasy year for children going to the cinema, with viewing options including The Dark Crystal, E.T. the Extra-Terrestrial, The Last Unicorn, and others. The Secret of NIMH really does emerge as a key product of its time.

The animation itself is truly superb, with a fine attention to detail and a rich sense of atmosphere. It is some of the film’s most foreboding elements that the design and art particularly shine: the rat leader Nicodemus (well performed as well by Derek Jacobi) and the Great Owl (John Carradine). The animation also makes use of full animation, which gives the characters a much stronger sense of movement than the more cut-down techniques that Disney were resorting to by The Fox and the Hound (during the production of which Bluth and his associates made their famous exit from the studio).

There is a strong sense of story being the top priority over character. There not many Disney animated features made that do not begin with and focus upon character: a clear protagonist and villain, well-crafted sidekicks, and so on – all the better for Disney to market in their theme parks and merchandising deals. Here there is a broad ensemble of characters with multiple aims and objectives. It makes the film less immediately open to audience, but also gives it a more complex storyline.

This is a well-produced and beautifully animated feature that, largely thanks to its strong story work, manages to continue entertaining audiences today. The energy and passion with which it was made has enabled it to linger on through the decades. It may have been Bluth’s debut as a feature director, but it also remains one of his absolute best films.