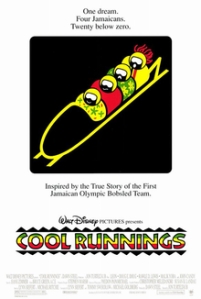 When a track mishap costs a group of Jamaican athletes their shot at the Summer Olympics, they approach retired coach and trainer Irving Blitzer to teach them how to run a bobsled team – based on Blitzer’s long-held belief that sprinters would make the ideal bobsled runners. Mocked and derided by foreign competitors, the four young men get their chance to compete in Calgary.

So here is how the story goes: in 1988 a Jamaican bobsled team qualified for the Calgary Winter Olympic Games. That is, in essence, the only point of similarity between Jon Turteltaub’s 1993 film comedy Cool Runnings and the historical events that inspired it. The details have changed. The characters have been invented. The circumstances of their forming a team, travelling to Canada, and their treatment by fellow athletes are all swapped out, altered, or entirely made up. This is a ‘true story’ based on the most generous definition of that term imaginable.

The question is: does that matter? As it stands, Cool Runnings is a brightly optimistic and warmly funny comedy, with solid performances and a no-nonsense visual approach that emphasises story over spectacle. It was a popular hit upon release, and re-viewed decades after that release it has aged but has not particularly dated.

The film’s four leads –  Leon Robinson, Doug E. Doug, Rawle D. Lewis, and Malik Yoba – deliver good performances built on broad, comedic strokes. Everyone has a chance to be funny, and more impressively everyone has a chance to find straight moments of drama to enhance and develop their characters. There is nothing complex going on, with the film passing by like a breeze, but everything is fleshed out just enough to give this otherwise passable comedy a modicum of depth.

The most impressive performance comes from the late John Candy, who plays Blitzer completely straight. Candy was a strong comedic talent, and to hold that talent while stepping aside in favour of his co-stars is a bold choice. Like many talented comedy performers, Candy is superb at drama and gives this film the spine it needs. His own sub-plot – a former sports cheat forced to face his former team-mates – gives some valuable grit to the piece. It is an absolute tragedy that Candy died shortly after Cool Runnings‘ release; he had a series of dramatic roles either lined up or in negotiation, and I strongly suspect it would have led to a bold new phase in his career.

Sometimes a film simply is what it is, and should be embraced as such. Cool Runnings is undemanding fare, but it achieves its aims and entertains its audience. I have not typically been impressed with Jon Turteltaub’s directorial works, but he is on the money here. He captures the story and the humour, and keeps everything else firmly in the background to keep the film’s strengths in focus. It’s all a hell of a lot of fun.