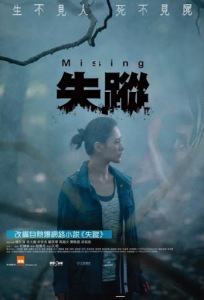 In Missing (not to be confused with the identically named Tsui Hark horror film from 2008) a grieving daughter (Gillian Chung) receives new hope when her long-vanished father’s police badge is found in a forest outside of Hong Kong. In her attempt to somehow find him again, she is drawn to urban myths about portals opening up in the woods – portals that lead to another world.

Hong Kong has such a patchy record in regards to screen horror. There seems a long-running trend within the local film industry to puncture any sense of atmosphere or tension with over-the-top silliness or bathetic moments of comedy. It is as if as a community Hong Kong’s filmmakers cannot quite feel legitimate making scary films, and self-sabotage any attempts in order to demonstrate they are not the job too seriously. Either than, or the city’s audiences simply do not like properly unsettling or disturbing films.

Missing, after a slightly shaky start, actually defies this trend. It manages to pull off a supernatural thriller that is in turns tense, creepy, and genuinely uneasy. It also manages to achieve this via an actively fantastical premise, which is an even more difficult achievement. The core supernatural concept, once revealed, offers a powerful – and very traditionally North Asian – background on which to build a frightening atmosphere. For local audiences this creative angle is, I am sure, more than familiar. For international viewers it still carries a pleasant frisson of novelty.

Debut director Ronnie Chau does an impressive job for a first-time feature, relying on sustained tension instead of easier jump-scares and teasing out a mystery over what is actually going on. The pace may put off some viewers, but it does an effective slow build as each piece of evidence or testimony leads Ying (Chung) to believe her father – missing for seven years after a hiking trip in the Hong Kong hills – might still be alive. Filling in the spaces in between her search are mysterious visions of a small boy, a neighbour’s struggle to care for his senile mother, and growing tensions between Ying and her mother (Candice Yu) – who has been trying let go of her husband’s memory while her daughter keeps bringing it up.

The supporting performances are effective enough, but unfortunately Chung feels rather like an empty space in the centre. It is a very subdued piece of acting that often comes across as rather uninvolved. It leaves the film to succeed via its storyline and presentation, where thankfully Chau has managed rather well. There is sufficient tension, atmosphere, and creeping horror to please an audience – albeit without ever quite amazing them. This is a solid genre piece that should please horror enthusiasts, and a promising debut, but one feels Ronnie Chau has better films than this ahead of him – and Chung has better films behind her.