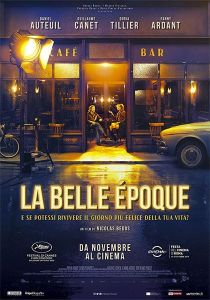 Victor (Daniel Auteuil) is a retired comic book creator in his 60s. When his wife (Fanny Ardant) demands a divorce, he takes up the offer to participate in an exclusive performative experience in which a team of technicians and actors recreate the historical setting of his choosing. Most clients select famous periods of French history; Victor requests one night in Nice in the 1970s – the night he first met the woman of his dreams (Doria Tillier).

La Belle Époque is a 2019 comedy-drama by writer/director Nicolas Bedos. It uses a decidedly odd framework within which to let its protagonist rediscover his creative drive and restore his faith in and enjoyment of his life. Once Victor enters the fictional recreation of 1970s Nice the film takes on a deliberately artificial and heightened state; one that brings to mind the likes of Peter Weir’s The Truman Show (1998) and, more close to home, Michel Gondry’s Eternal Sunshine of the Spotless Mind (2004). Victor spends a holiday inside a simulacrum of his own life, and as he becomes more attached to his false life the more surreal his experience becomes. Sometimes his experience is enormously funny. Sometimes it strikes a melancholic, regretful tone. The real achievement of Bedos’ film is that sometimes it manages to do both at the same time.

Daniel Auteuil delivers a wonderfully warm and varied performance as Victor, who delights in his memories while grumbles about his present-day situation. The manner in which he comes to embrace his new reality is wonderfully charming, and contrasts well against Fanny Ardant’s portrayal of his ex-wife Marianne’s frustration with her new lover . That lover is Victor’s former boss (Denis Podalydès), who fired Victor when his newspaper shifted online. Podalydès is wonderfully awkward and nervous in the part; he jitters with both guilt and paranoia that Victor will discover his second betrayal.

When Victor enters his fictional retreat, the role of his first love is played by an actress named Margot (played in turn by the excellent Doria Tillier). When he meets her he initially struggles to identify with her, but once he lets go a spark of romance blooms. When he gets to know the real Margot, that spark flares up even more strongly – but by that stage who can tell where the first love ends and Margot begins? As doubt surfaces, the comedy in the film takes a back seat to some increasingly sad drama. With whom is Victor falling in love, and is it love at all or merely a manufactured infatuation? Things are complicated by Margot’s boss – and the mastermind behind the recreations – being her ex-boyfriend (Guilliame Canet) Antoine, who clearly has failed to emotionally let go of his attachment to her.

It is a very upper class sort of a film, with the performative recreations undertaken at enormous cost and exclusively for the obscenely rich. The film’s charms are notable but presented so enthusiastically as to potentially make it all too sweet and heartwarming. Dwell on the logistics of the events for more than a moment and the entire premise threatens to fall about. Watch the film in the spirit in which it was clearly intended, however, and there is a wonderfully sweet confection here to be consumed and enjoyed.

La Belle Époque is screening across Australia as part of this year’s Alliance Française French Film Festival from 10 March. Check the website for your local schedule.