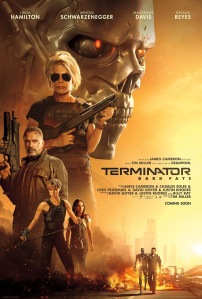 Decades after the events of Terminator 2: Judgment Day, a young Mexican woman (Natalia Reyes) comes under attack from an advanced killer robot from the future, with her only protection coming from a time-travelling guardian (Mackenzie Davis) and Sarah Connor (Linda Hamilton) – an embittered survivor who has been fighting Terminators for her entire life.

Terminator has been one of Hollywood’s more troubled franchises ever since studios struck on the idea of extending writer/director James Cameron original two film sequence with additional instalments. Jonathan Mostow (U571) made an attempt with the amiable but redundant 2003 sequel Terminator 3: Rise of the Machines. When that failed to take with audiences, McG (Charlie’s Angels) took a stronger step with the future-set and much more intriguing Terminator: Salvation (2009) – intended as the first in a trilogy – whose clever ideas and innovations were largely scuppered by studio interference. In 2015 Alan Taylor (Game of Thrones) directed the overly busy and confused Terminator: Genesys, also intended as the first in a trilogy, also badly mishandled by second-guessed edits and studio interference. What is interesting about these sequels is that only Salvation lost money – both Rise of the Machines and Genesys grossed enough money to at least break even. With a combined cost of about $540 million, and an overall gross of $1.25 billion, the Terminator sequels are probably the most financially successful failures in Hollywood history.

And here we are again, with a 2019 production – Dark Fate – that ignores the events of the earlier films and takes its cue from Cameron’s own Terminator 2. This time, the publicity claimed, it would be different. Cameron was supervising the film and working as producer. Deadpool‘s Tim Miller would direct. Critically, original star Linda Hamilton would return for the first time to the role of Sarah Connor. It was, unsurprisingly, also pitched as the first film in a new trilogy.

To be honest though, Dark Fate is not that different from the other post-Judgment Day sequels. There are still people coming back in time, one to protect an unsuspecting civilian and another to assassinate them. There is a destructive vehicle chase early into the piece. The climax takes place in a heavy industrial setting. In the middle there is a chase between a van and a police helicopter. The details have changed, and some of the chess pieces rearranged, but in the end this is the same basic plot we have already sat through four out of five times (Salvation being the sole exception to the formula). The set pieces are admittedly very powerfully staged. The new members of the cast are enjoyable and convincing, while returning players Arnold Schwarzenegger and Linda Hamilton slip into older, more complex versions of their characters. Ultimately, however, this is still the third-best of a six-film series. Fans of the franchise should enjoy it. Anybody looking for a reasonably smart blend of science fiction, action, and mild horror should enjoy it. Other than that, Dark Fate is simply there. It does not do anything wrong per se, but neither does it do anything exceptional. By and large it fails to innovate: it tries to shift the narrative forward by moving beyond the destructive future of the previous films – only to replace it with a near-identical one.

Tim Miller has done a rock-solid job within the boundaries of the story, but this is a film that – coming off the back of three other films with mixed audience responses – really needed to strike out and make a statement of purpose. There’s no statement here, leaving just well-staged and enjoyable commercial entertainment. By all means enjoy it on its considerable merits, but know that Terminator has hit a dead end, and with its box office gross being what it was there no real likelihood of the well being revisited again any time soon.