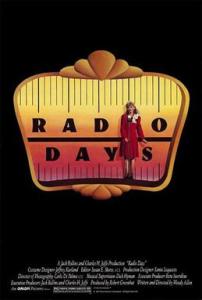 A man named Joe reminisces on his childhood in the early 1940s, when his extended family lived together in Rockaway Beach and radio was the king of American culture. In a series of anecdotes he recalls both the famous incidents of the local radio empire as well as his own young self (Seth Green) growing up on the eve of the Second World War.

Radio Days is a 1987 blend of comedy and drama written and directed by Woody Allen. While he does not personally appear, as he does in many of his films, Allen does narrate as the older Joe looking back on his childhood. The younger Joe is played by a particularly youthful Seth Green (Austin Powers, Family Guy) who gives the character a wonderfully earnest quality. His own enthusiasm rubs off on the character and on the film in general. It is through the young Joe’s eyes we experience much of the film – save for the intermittent comedic stories that his older self describes, and a wide range of stunning actors act out. As is often the case with an Allen film, Radio Days boasts the proverbial ‘all-star cast’ including Mia Farrow, Jeff Daniels, Dianne Weist, Wallace Shawn, Larry David, Danny Aiello, and Diane Keaton. Particularly striking among the cast are Michael Tucker and Julie Kavner as young Joe’s parents: Tucker delivers a warm, very endearing performance, while Kavner feels so authentic and charismatic that one feels it a shame that shortly afterwards she found herself locked into voicing Marge Simpson on television. It was a windfall for Kavner, but a loss for cinema audiences.

There is a casual and amiable pace to the film. It jumps back and forth between a standard family narrative and the older Joe’s anecdotes and stories. These comic interludes are wonderfully varied and charming, and give much of the film a feel of sketch comedy. The main narrative is rich with nostalgia and warmth, with Allen revealing a genuine affection for the radio entertainment and drama of the time. It is, after all, his own youth; he was born in 1935.

The scale of the film tends to creep up on the viewer, revealing vignette after vignette – each with its own talented cast. They cross over and link up now and then, slowly building independent scenes and sketches into a fully connected and immersive world. By the film’s final scene Allen has crafted an entire world out of a series of amusing stories. It is a quiet but wholly remarkable achievement.

The film is beautifully shot by Carlo Di Palma, in the second of 12 collaborations with Allen. There is a subtle richness to the film, buoyed by a great period soundtrack and score by Dick Hyman. It manages to walk that tightrope between warmth and sentimentality.

This is one of Allen’s most underrated films. It is clever and funny for sure, but it is also remarkably sweet with a deep melancholic longing: for childhood, for old-fashioned entertainment, and most of all for family.