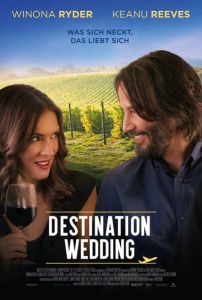 Frank (Keanu Reeves) is reluctantly attending his half-brother’s wedding in Paso Robles, California. At the airport he has an unpleasant encounter with Lindsay (Winona Ryder) – who turns out to be Frank’s brother’s ex-fiancée, and is attending the same wedding.

Destination Wedding is a romantic comedy that pairs together Keanu Reeves and Winona Ryder for the first time since Bram Stoker’s Dracula in 1992. Both were iconic young actors of the 1980s, both of whom have tracked extensive screen careers since, yet putting them back together feels like the most logical idea possible. There is a natural charm and chemistry between them; if told they were to start dating in real life, I doubt anybody would be remotely surprised. They work together so well.

This chemistry is extremely valuable in Destination Wedding, because without it it is doubtful the film would get across the line intact. Writer/director Victor Levin portrays both characters as deeply cynical and misanthropic, and to such an inordinate degree that now and then each comes across as actively unlikeable. Be aware that the film’s poster is lying to you, with its flirtatious smiles and seductive eye contact. Both characters begin complaining bitterly at one another within seconds of meeting and don’t stop until the film is over.

This is not to claim the film is worthless. In fact it is far from it. The misanthropy lends itself to a satisfying number of funny moments and successful gags. Wedding-haters – particularly those that hate weddings that involve travelling way out of town to go – will identify with a lot of Frank and Lindsay’s displeasure. Ryder and Reeves’ screen presence works every joke as well as they can, and it definitely works more often that it doesn’t. Where it fails, however, it fails obviously and sometimes painfully.

What does work well is the film’s aggressively tight focus on its leads, both narratively and visually. Nearly every other character is essentially a cameo or an extra. We hardly see them on screen at all. The film is, in effect, a series of one-on-one conversations: at an airport, on a plane, at a reception dinner, and so on. It gives each scene a much more intimate feel than is usually presented in this kind of a comedy, and does enable Destination Wedding to stand out from ostensibly similar works.

In the end Destination Wedding is a funny comedy, and an entertaining film – but only to a certain extent. It elicits more laughs than groans, and its characters are enjoyable to watch more often than they are not. With a more evenly written screenplay it would be outstanding. As it stands, the best measure available to judge its appeal before watching is this: how much do you love Winona Ryder and Keanu Reeves? They are far and away the film’s strongest asset, and make you wish they had a better vehicle than this to showcase their charms.