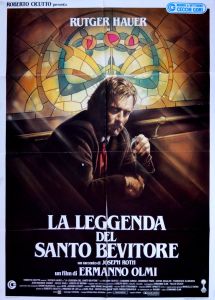 On 19 July this year, the Dutch actor Rutger Hauer died. He had been one of my favourite actors for much of my life, ever since being entranced by his performance as the runaway fugitive Roy Batty in Ridley Scott’s 1982 film Blade Runner. Tributes and obituaries all cited Blade Runner as one of his most noted performances, as well as his early Dutch performances in Turkish Delight and Soldier of Orange. Several of the tributes also mentioned the 1988 Italian drama The Legend of the Holy Drinker – which I had not seen, or to be honest even heard about before. More than once I read the claim that Holy Drinker marked Hauer’s best-ever performance. It felt necessary to be seen.

The Legend of the Holy Drinker features Hauer as Andreas Kartack, a Polish coal miner now living on the streets of Paris and progressively drinking himself to death. One day he meets an anonymous but wealthy stranger (Anthony Quayle), who loans him 200 francs on the condition that he repay the money as soon as he can by donating the same amount to a nearby church. Over the course of the next week Andreas struggles to repay the money while encountering a progressively unlikely string of old friends and new acquaintances.

The film is based on the 1939 novella by Joseph Roth, and comes courtesy of the Italian writer/director Ermanno Olmi – co-writing here with Tullio Kezich. It is a heightened and theatrical piece, with slightly overt performances and a folkloric, almost naive quality. The story is ultimately very simple, but as it plays out over a leisurely two hours it allows an enormous length of time to sink into tone, character, and emotion.

It is all beautifully framed and lit, with a very 1980s style of vivid blue-orange contrasts. It seems rich with symbolism and visual metaphor. Cinematographer Dante Spinotti (Heat, L.A. Confidential, The Last of the Mohicans) is a superb and reliable visual stylist, and works on absolutely top form here. The film is gorgeous.

As Andreas’ adventure goes on, he begins to be reminded of the Polish home and job he once had, and the events that tragically led to his drunken exile in France. The flashbacks illuminate his character, and enrich the present-day sequences as he is propelled from one episodic encounter to another. Those encounters are populated with outstanding supporting performances, delivered by a combination of professionals and non-actors. Gradually the visions begin to shift from flashbacks to simply hallucinating the past inside the present.

As for Rutger Hauer? He is transcendent. The film’s sparse dialogue almost renders it a silent movie, and Olmi’s direction uses those long breaks of silence to quietly present a range of emotional states and reactions on Andreas’ drunken, shambolic face. Hauer was gifted with a remarkable one – particularly his striking blue eyes, rich with ambivalence and a gentle intensity. Olmi exploits it perfectly. Hauer delivers one of his most expressive and enchanting performances ever, cementing the audience’s interest in Andreas and proving an emotional focus to what is otherwise a very relaxed and laconic feature. The Legend of the Holy Drinker is a quiet, charming near-masterpiece – and the perfect testament to one of Europe’s finest-ever screen talents. I will deeply miss his presence on-screen.