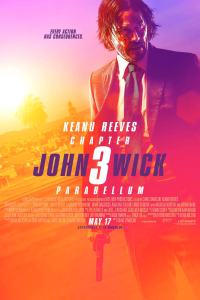 Professional assassin John Wick (Keanu Reeves) has murdered a member of the ‘high table’ – the aristocratic powerbrokers who rule a secret world of killers. Now he is alone, targeted by all thanks to a $14 million dollar price on his head, and unable to call on any of his former allies.

The 2017 sequel John Wick Chapter 2 ended on the above premise, with John running with his dog into the New York streets – just minutes from the launch of an all-out manhunt to take him down. I was not particularly anamoured with Chapter 2, which took the non-stop exaggerated violence of the original John Wick and inserted an inordinate amount of overly serious back story, international intrigue, and a weirdly serious take on what had initially been a straight-forward, gleefully funny action flick. As a viewer I felt better off with the simplicity of the original, and had no real desire for stories of the high table, markers, international conspiracies, and ‘excommunicado’ killers. That there have been three films made to date about John Wick demonstrates a healthy market for this sort of narrative silliness, so for the viewers who warmed to the second film’s half-whispered pomposity this may well be an even more effective and enjoyable sequel. For those, like me, who only came to the franchise for the superb action scenes, every minute of absurd world-building is a minute lost of car chases, stabbings, and gunfights.

This is the raison-d’etre of John Wick. It is the character that is best-suited for Keanu Reeves, a performer of enormous presence and superb deadpan humour. He is constantly underrated by moviegoers, and has been for decades, and all the while he has been quietly working away – a Speed here, a Matrix there – making a really difficult job look almost effortless. The Wick films have made a habit of casting actors with presence, this time adding Halle Berry (not a fan, but she acquits herself well), Angelica Huston (always superb), and Mark Dacascos (as underrated a performer as Reeves – arguably more so); this on top of returning actors Laurence Fishburne and Ian McShane. When the film plays in this narrow corridor – swapping from inventive action sequences to high-grade actors in camp conversation – it is as effective and entertaining as the original. Once the high table business steps in, and less impressive characters start swapping jargon in hushed tones, it disappoints. Particularly egregious is Asia Kate Dillon as ‘the adjudicator’, a high table representative sent to punish the supporting cast for helping Wick in the previous film. They do their best in the role, but the dialogue and characterisation simply lets them down. As one of Hollywood’s comparatively rare non-binary actors, they deserve better than this.

It is the action that is the draw here. Gunfights on horseback. Sword fights on motorcyles. People throwing knives at each other in a shop full of antique knives. There is even a showy and self-aware cameo by Yayan Ruhian and Cecep Arif Rahman from The Raid. When Chapter 3 pushes the accelerator to the floor and kills a bunch of henchmen, it is absolutely outstanding stuff. When it slips back into Chapter 2 territory, it drops from outstanding to merely good – and that’s a shame.