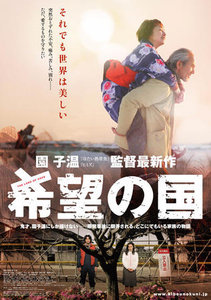 assive earthquake hits Japan’s east coast, sending a nuclear reactor into meltdown and forcing the evacuation of the area. A 20 kilometre-wide exclusion zone is rapidly set up, with anybody within the zone urgently driven out of their homes. Dairy farmer Yasuhiko (Isao Natsuyagi) lives exactly 20 kilometres from the reactor. The line of exclusion bisects his front garden, leaving everybody down the street driven from their homes and Yasuhiko and his family left behind in a ludicrous act of government bureaucracy.

Japan is a country that has suffered numerous national traumas over the past century or so, and Japanese cinema has always been quick to respond to those traumas in an artistic fashion. The atomic bombings of Hiroshima and Nagasaki begat a range of productions from Godzilla to Astroboy, the Great Hanshin earthquake and Tokyo subway bombings inspired a generation of bleak, nihilistic horror, and most recently the 2011 Great Sendai earthquake and tsunami has provoked a fresh range of film responses. Prolific director Sion Sono was one of the first off the ranks, first delivering the provocative Himizu in January 2012 and then following it up with Land of Hope just 10 months later.

Understandably Land of Hope is the more complex and thoughtful work, and reflects the 2011 tsunami in a more direct fashion. To avoid risking offence or unnecessary controversy, Sono sets his film in the fictional Nagashima prefecture – a blend of the real-life Nagasaki and Fukushima prefectures. He shoots the film on location in Fukushima, however, taking advantage of the actual devastation to deliver a more epic scope on a limited budget. It works brilliantly. He may soften the blow by renaming where the film is set, but the links to Fukushima, the government mismanagement and disorder, and the catastrophic death toll all resonate powerfully.

Natsuyagi is superb as the elderly Yasuhiko, who exhibits a stubbornness and a refusal to cooperate with the authorities that ranges from the amusing to the sorrowful. There is a wide range of tones to this film, and he is one of the key sources of it. His wife Chieko (Naoko Otani, performing brilliantly) has rapidly detereorating dementia, and even when the government representatives decide they should leave their home, Yasuhiko insists they remain to keep Chieko settled and calm. There is an underlying sadness to their situation, but their interplay throughout the film is a regular delight.

While Yasuhiko and his wife stay resolutely at home, his son Yoichi (Jun Murakami) and daughter-in-law Izumi (Megumi Kagurazaka) retreat into town due to Izumi’s pregnancy. Once outside of the radiation zone, however, Izumi grows paranoid that the government estimates are wrong, and takes to carrying a geiger counter and wearing astronaut-like radiation suits to the supermarket. Kagurazaka plays Izumi’s growing distress well, while Murakami does a slow burn protrayal as a man gradually crumpling under pressure at home at ridicule at work.

Threaded among the primary narrative is a haunting subplot in which one of Toichi’s friends (Yutaka Shimizu) escorts his girlfriend (Hikari Kajiwara) into the radiation zone to find whatever remains of her family home – and her missing parents. While not well connected to the rest of the film, it incorporates the film’s most unsettling scenes. It could easily form the basis of its own feature – perhaps it should have.

This is an unexpected film for viewers familiar with Sion Sono, because unlike the bulk of Sono’s films it runs in a comparatively naturalistic and pointed political direction. There are moments of humour and moments of sorrow. The odd scene punctures the story to feel positively transcendent. Sono makes an awful lot of features – 18 in the last decade alone – but I honestly feel this is one of his very best.