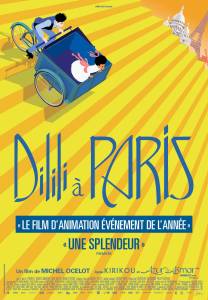 New Caledonian immigrant Dilili (Prunelle Charles-Ambron) escapes the confines of her cultural display in Paris to explore the city in depth. When she meets the local courier Orel (Enzo Ratsito), they team up to solve the mystery of a series of disappearances among Paris’ young girls.

Michel Ocelot is France’s most well known animation director, having found great success over the years with his distinctive brand of flattened and weirdly two-dimensional aesthetic. Through films such as Kirikou and the Sorceress (1998), Azur & Asmar: The Prince’s Quest (2006), and Tales of the Night (2011), he has won over fans, audiences, and critics all over the world. Dilili in Paris (2018) is his latest effort, and introduces a striking new development to his famous aesthetic.

The characters are animated in a simple CGI fashion, low on fine detail but high on fluid, graceful movement. That animation has been flattened with bold colouring to appear psuedo-realistic and two-dimensional at the same time. Their performances play out against mostly photographic backgrounds, with Ocelet’s own location photography giving everything a sharp and distinctive realism. It is a slightly jarring look at first, but a memorable one, and with familiarity it begins to settle down and feel rather effective.

The film runs with a relatively simple and superficial story, and for the bulk of the movie acts as a method to introduce its title character to a ‘who’s who’ of the 19th century’s famed Belle Époque. Over the course of solving the mystery, Dilili encounters and befriends Marie Curie, Sarah Bernhardt, Louis Pasteur, Henri de Toulouse-Lautrec, Erik Satie, and numerous other famed and important figures of the time. It soon feels repetitive, and more than a little twee, and makes much of the film feel more like something made to educate children rather than entertain them. More subtle, and certainly much more effective for the adult members of the audience, are the hidden elements of late 19th century art such as Toulouse-Lautrec’s famous portrait of Aristide Bruant sneaked here and there into crowd scenes. There is a lot of text here for a patient viewer to consume. Fans or scholars of the time and the artistic movements will likely have a ball that general viewers simply will not recognise.

The relatively bland simplicity of the film falls away when Dilili finally stumbles upon the secret society that is kidnapping all of Paris’ little girls. To call it jarring is an understatement: what has previously seemed a children’s film is up-ended by a confronting act of misogyny that is as unexpected as it is grotesque. It is effective, but also troublesome. It makes for a much more interesting film, but it is debatable how suitable the final film is for younger viewers.

Dilili in Paris is a curate’s egg that satisfies tremendous in some areas, but disappoints in others. While leaning towards the good side, it is – more than anything else – an intellectually fascinating exercise to tell a children’s story, celebrate French history, engage in a post-modern act of pastiche, and deliver a history lesson at the same time. Ocelet’s ambition here is superb, and his efforts make for a fascinating albeit uneven work.

Dilili in Paris (Dilili a Paris)will tour Australia from 5 March as part of the Alliance Française French Film Festival 2019. Click here for more information on this and other French language films screening this year.