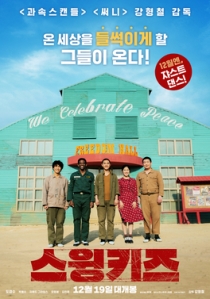 1951: Ro Ki-soo (Do Kyung-soo) is a rebellious young North Korean prisoner in an American POW camp. He is a troublemaker in the camp and given minor celebrity status by his comrades thanks to his war hero brother. When the American Sgt Jackson (Jared Grimes) attempts to put together a tap dancing revue for the camp’s Christmas celebrations, Ki-soo is torn between his allegiance to his communist ideals and his newly discovered love for dance.

Swing Kids is a complicated affair, and probably not what audiences are expecting, but at the same time this surprising genre mash-up is the first film in Australian cinemas this year guaranteed to make viewers sit up and take notice. It starts off as an admittedly unlikely crowd-pleaser about a group of disparate misfits – an American GI, a North Korean rebel, a Chinese soldier with angina, an aspiring civilian singer, and a misplaced South Korean refugee – putting together a show. Halfway through it starts threading in elements of a harrowing war-time thriller. By the climax two very different film narratives are forced to collide. The result is a peculiar blend of not simply genres but national filmmaking styles: the American feel-good comedy and the melodramatic Korean thriller. Swing Kids therefore asks a fair amount of its audience. If you are able to personally make the leap of faith, there are tremendous creative dividends in the offing.

One huge advantage to Swing Kids over other recent big-screen musicals is that here the cast can honestly dance their socks off. Co-lead Jared Grimes is a hugely talented Broadway star and award-winning tap dancer, and turns out to be a fine screen actor as well. He delivers a lot of sympathy to the character of Sgt Jackson. Jackson knows that his commander (played odiously by Ross Kettle) has ordered he teach some prisoners to perform a dance show in order to demean and ridicule those prisoners. At the same time he is presented with a strange group of potential dancers who each really want to dance. So dance they do.

This half of the film falls neatly into that broad genre of misfit ensembles, taking a group of awkward or absurd individuals and having them fight their way to a special performance or sports league. Masayuki Suo’s 1992 classic Sumo Do, Sumo Don’t likely remains the gold standard, but Swing Kids makes a rock-solid swing for the fences. Jackson’s troupe is a colourful set of eccentrics, including a chubby Chinese infantryman who dances brilliantly for 60 seconds before collapsing from a near-heart attack (Kim Min-ho), a soft-spoken Korean hiding out in the safety of the camp until he can find his wife (Oh Jung-se), and an ambitious young woman with her eyes set on an American tour (Park Hye-su). The comedy is wonderful, and affectionate. The dance sequences are exceptional, with cinematographer Kim Ji-yong taking a lot of time to ensure the entire actor can be seen during a routine: there is not any apparent cheating in the choreography here, and who you see is who is doing the dancing.

There is an odd but pleasing sense of anachronism to the film. When Chinese soldier Xiao Fang lets loose, it’s more akin to late-1980s vogueing than anything appropriate to the early 1950s. One show-stopping emotional number midway through the film is performed to David Bowie’s hit single “Modern Love”; not a 1950s-styled cover version either, but the actual Bowie performance. A showdown between the troupe and a group of racist American GIs plays out as a contemporary dance-off. It should all feel weird but it is so boldly implemented that it is simply easier to embrace.

More difficult to manage is the introduction of a deadly serious war-based subplot in which the North Korean prisoners become restive and violent, and the American command begin searching for a secret Northern leader – and the Koreans begin tracking down a mole within their own quarters. Tensions rise and, admittedly in keeping with real-life events at the Gyeoje prison camp, a body count begins to rise. When the two main storylines collide, it makes for a fairly divisive climax. Some viewers will embrace the contrast, which feels easier from a Korean cinema viewpoint, while others will likely struggle. A well-time epilogue pulls things a little into shape, but it is one hell of a wobbly landing. No matter: in the end the good of Swing Kids vastly outweighs the bad. It’s a perfect opportunity for well-worn archetypes to get a fresh and pleasing remix.