2018 was a pretty great year for feature films. I remember saying the same thing about 2017, and it’s true: it really seems to me that global cinema is going through something of a golden age. Personally I put much of that down to distribution: it has never been as easy or convenient to see the best films that the world has to offer. Online streaming through such venues as Netflix and Stan has a lot to do with that; while it may be preferable to see films on the big screen in a cinema, their availability via the Internet is to me a satisfactory substitute.

Streaming services may well be saving the foreign and independent films, since mainstream cinemas are more than ever being strangled by corporate content. 2018 saw Walt Disney release so much big-budget product that they effectively went into competition with themselves: no sooner had Solo: A Star Wars Story entered the cinemas that it was already having its business crushed by Avengers: Infinity War. 2019 looks to be even more squeezed by the House of Mouse, with the release of remakes of Dumbo, Aladdin, and The Lion King, the sequels Toy Story 4, Frozen 2 and Star Wars: Episode IX, Marvel efforts Captain Marvel, Avengers: Endgame, and Spider-Man: Far From Home (made by Disney but released by Sony), and even original efforts like Artemis Fowl. 2019 is, of course, also the year that Disney and 20th Century Fox finally commit to their merger. Any film-goer not terrified by these developments simply isn’t paying enough attention.

My top 10 films of 2018 are not any attempt at a definitive or objective list. I am not a full-time critic, and there are numerous 2018 releases that either have yet to receive an Australian release or which I simply failed to find time to watch. If there is a great film from this year not on my list, it’s a solid bet that it’s missing for one of those two reasons. Films I loved this year that didn’t make my top 10 included Dying to Survive, Dumplin’, Little Forest, Believer, Marlina the Murderer in Four Acts, Menashe, Aquaman, Outlaw King, Creed II, Solo: A Star Wars Story, Tigers are not Afraid, Little Forest, Believer, Black Panther, Avengers: Infinity War, Number One, The Favourite, and A Quiet Place. 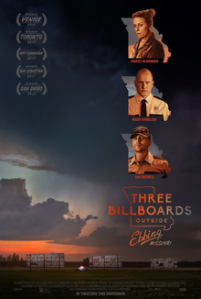 A 2017 release, this came to Australian cinemas in early 2018 where it made a tremendous impact on me. It was well-scripted, neatly directed, and represented an absolute powerhouse showcase for actors like Frances McDormand and Woody Harrelsen. More than a year on, and that impact lingers in the mind. It enjoyed its hype, and it survived the inevitable odd backlash that popular films of this kind always seem to receive.

In my review, I wrote: ‘The plotting is sensational, because McDonagh refuses to make obvious choices. That makes it a difficult film to predict. Things do not go the way the audience expects them to, or possibly even wants them to. A mid-film event turns the entire movie on its head, in a fashion that feels like it should have been disastrous – but instead it throws everything into a whole new direction.’ 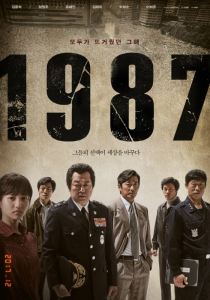 South Korean history gets a stunning dramatic treatment in this real-life drama about government conspiracies, public uprisings, and torture. It takes a complex set of events and personalities and carefully replays them into a clear and gripping political and personal narrative.

In my review, I wrote: ‘Screenwriter Kim Kyung-chan does a superb job with an extremely difficult and complex subject matter. The film begins with a dead body in a small room. It ends with more than a million people taking to the streets of Seoul. As the story expands, so does its cast, and it is testament to the skills of both writer and director that 1987 never gets confusing and never becomes laboured under the weight of its constantly growing set of characters.’ 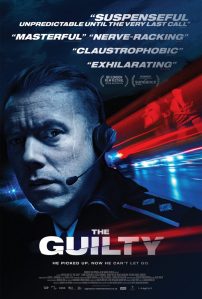 Asger is a benched police officer awaiting the results of an internal investigation while staffing an emergency response centre. When a woman calls from the back of her kidnapper’s car, Asger is left to coordinate her rescue from his desk – only things are not quite what they seem. The striking element of this fast-paced and intense thriller is that the entire film takes place at a policeman’s desk, with all of the other action heard over a telephone. It is a short, brilliantly written and performed play masquerading as a feature film.

In my review, I noted that the film ‘wisely utilises a slow build as a kidnapping turns into a murder, and that murder begins to ratchet up Asger’s own tensions about the killing of which he has been accused. It builds the facts behind the kidnapping like a jigsaw puzzle, as each revelation forces the viewer to reconsider what they have already heard.’ 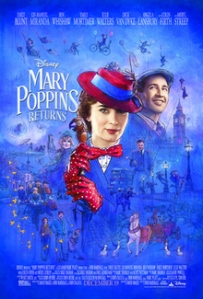 Simply a remarkable achievement in filmmaking, director Rob Marshall’s Mary Poppins sequel came 54 years after its predecessor and managed the deft task of both honouring the iconic original and finding room for its own particular style. Emily Blunt performed the title role like an honest-to-god miracle. In my opinion this was the best studio-produced feature of the year.

In my review, I wrote: ‘It is a handsome production, with an excellent Marc Shaiman score supporting the songs and particularly eye-popping costumes designed by Sandy Powell. Visually it is a film that straddles two worlds, keeping one feet each in the aesthetic of its predecessor and a more dynamic, contemporary look. The visual effects and animation – both cel-based and CGI – are top notch.’ 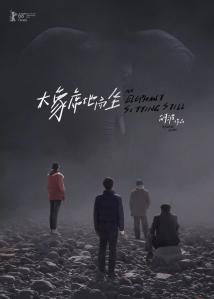 One of the year’s two great Chinese productions, and one particularly marked by tragedy: its talented writer/director committed suicide before post-production was complete, leaving An Elephant Standing Still as a roughly-hewn and lengthy rough cut for all time. It’s melancholic tone was remarkable, and it more than earned its widespread international accolades.

In my review, I wrote: ‘An Elephant Sitting Still presents a world of relentless dulled sorrow, where people suffer dreadful calamity, or jump out of windows to their death, or discover their loved ones don’t exactly love them back. It showcases sadness without escape, so much so that its creator wound up taking his own life. It is the kind of misery one simply cannot escape.’ 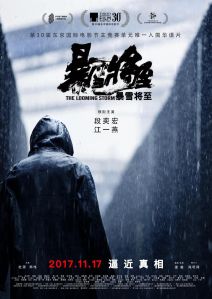 First-time filmmaker Dong Yue makes a phenomenal impact with this 2017 Chinese neo-noir, released internationally in 2018 to a shower of critical praise. For me it was neck-and-neck with An Elephant Standing Still, but as time goes on I’m thinking back on it with a more and more enthused reaction.

In my recent review, I wrote that ‘to a large extent The Looming Storm‘s final act is inaccessible to non-Chinese audiences, and English-speaking viewers will benefit by approaching it with patience and extensive thinking on the way out of the theatre. The Looming Storm does not simply deliver thrills to its audience. It wants to make us work a little in return.’ 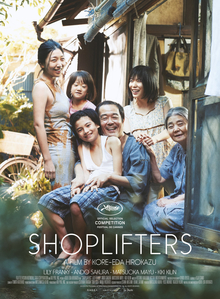 Hirokazu Kore-eda has spent some years as one of Japan’s most talented filmmakers, and in 2018 he completely knocked it out of the park with Shoplifters; a deft comedy that elegantly transforms over the course of the film into a heart-shattering tragedy at the same time. It is the kind of immensely viewable, and subtly complex films I have seen. I strongly suspect for Kore-eda it marks a career high – and his career already has had several of those.

The day after I watched this superb film at the Melbourne International Film Festival I got hospitalised by a massive amnesia-generating migraine that lasted for three days (purely by coincidence), and as a result I forgot to actually write a review of this. I’m waiting to rewatch it and refresh my thoughts once it’s available on home video. 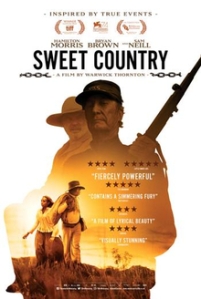 Warwick Thornton’s long-awaited second feature is a brutally effective indictment on white colonialism in Australia, but at the same time it is also an impeccably staged, shot and performed Australian western with memorable characters, a harsh aesthetic, and brilliantly staged scenes of action. We have seen locally produced takes on the genre before – John Hillcoat’s The Proposition immediately springs to mind, but Sweet Country really is in a class of its own.

In reviewing it, I wrote: ‘Particularly impressive is Bryan Brown: this is one of the strongest performances I have seen him give. Sergeant Fletcher seems another monster of a man, but humanity leaks onto the screen in fits and starts. By the end of the film he has demonstrated enough facets and startling little moments to represent one of the most three-dimensional and realistic portraits I have seen an actor give all year. He is not likeable, but he is absolutely riveting.’ 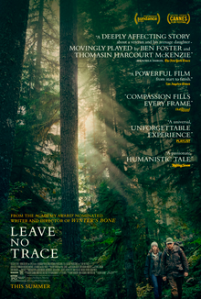 Debra Granik is a master of small scale realist dramas, previously with Down to the Bone and Winter’s Bone. Leave No Trace follows an army veteran (Ben Foster) and his teenage daughter (Thomasin McKenzie) who live off the grid in a national park. The actions are small and intimate, but the emotion effect is a powerhouse. There are few American directors working today who are this subtle and effective.

In my review, I wrote: ‘Behind the camera Leave No Trace is as close to faultless as a film can get. It’s beautifully shot and edited, and uses a wonderfully subtle and emotive score by Dickon Hinchcliffe. The locations are pitch-perfect, and Granik’s standard method of casting local non-actors in supporting roles gives everything a genuine sense of authenticity. Every aspect of the production works in union.’ 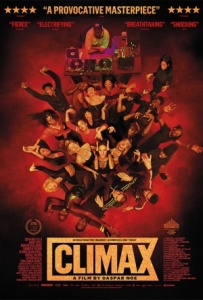 In Gaspar Noe’s thriller Climax, a contemporary dance troupe hold a party in an isolated building – at which the punch has been liberally spiked with hallucinogens. The ensuing drug trip is a harrowing and violent experience that not all present will survive. The film does not have the strongest story of the year, nor the finest performances (much of the cast are non-actors). What it does boast is the most viscerally effective experience of the year. Climax is inventive and visually overwhelming. Its camera work is so uncomfortable and unsteady that at times it is actively nauseating. Key moments are confrontational enough to cause offence. Noe makes a film that has a physical effect on the viewer, both positive and negative. The opening dance sequence is particularly strong, and when events then go all to hell, that strength is thrown back in a staggeringly difficult direction.

From my review at FilmInk: ‘The remarkable part is that Noé only needs to present something horrifying a few times for the audience’s paranoia to do the rest of the job for him. One spends much of Climax in a state of constant rising dread. It is a hugely uncomfortable place to be. The film is enormously uncomfortable and tense. In one middle sequence, you feel actively nauseous. For a film to generate such a physical response in the viewer is a remarkable achievement. Most viewers likely will not enjoy it. Some will probably object to its having ever been made at all. For those with an interest at just how far motion pictures can affect the viewer, Climax is the best horror film of 2018 to date.’