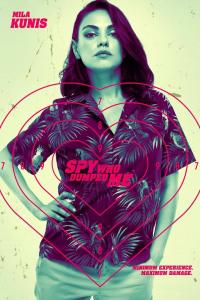 Audrey (Mila Kunis) lives a dull suburban life with her best friend Morgan (Kate McKinnon), only to discover in explosive fashion that her ex-boyfriend Drew (Justin Theroux) is a secret agent. When Drew is assassinated in Audrey’s apartment, she and Morgan go on the run and try to complete his mission on his behalf.

It is pretty fair to describe The Spy Who Dumped Me as a typical commercial comedy, but it is also fair to describe it as a very good one. While the storyline is, in broad strokes, a comfortably predictable one, it also finds places and means to surprise and give the traditional elements a fresh take. For one thing I was fully expecting to watch a film about an incompetent, love-struck ex-girlfriend stumbling her way through a European adventure through pure luck. What I was not expecting was a story in which the love-struck ex-girlfriend actually has an affinity for espionage. This isn’t a stumbling protagonist played out for silly jokes; it turns out that Audrey is pretty good at driving cars very fast and shooting henchmen stone dead.

It is also much more violent than I expected. Viewers expecting a comedy in the vein of Paul Feig’s Spy would be better off expecting something in the vicinity of Beverly Hills Cop. There is a lot of action going on, and a lot of people getting killed across a variety of European locales. It is the biggest part of the film’s fresh take – director Susanna Fogel isn’t just delivering an enjoyable comedy but a serviceable action flick too.

There is some solid supporting talent in the film, including Gillian Anderson, Justin Theroux, and Sam Heughan, but the weight of the film falls firmly on the shoulders of stars Mila Kunis and Kate McKinnon. Both have extensive demonstrated their comic talents, and have a spectacular chemistry together. Kunis has the more difficult job having to sell the idea that’s she actually pretty good at the spying game, but it’s one she largely pulls off and of course she has a tremendous screen presence and charisma. McKinnon to a large part simply continues the kooky schtick that she has employed in her earlier film roles. One day it will get tiresome – she is basically a female Jim Carrey, and it certainly got tiresome for him – but for now it is still pretty awesomely funny.

As is often the case with these kinds of movies, the weakest part is probably the climax. The focus shifts from simply being funny to actually resolving a story. While definitely weaker than the earlier acts, it does still work much better than other comedies of this type. That is a comment that can be extended in many respects to the entire film: while it colours in fairly conservatively between the lines, it does it just enough better than its contemporaries to be worth recommending. You probably have an expectation of what to get from The Spy Who Dumped Me. In the end it gives you what you think – just a little bit better than you are likely expecting.