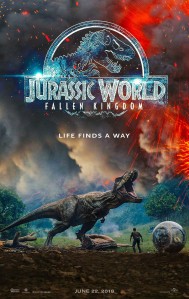 Three years after the closure of the Jurassic World theme park, the dinosaurs of Isla Nublar come under threat from an imminent volcanic eruption. With the American government refusing to act, former park manager Claire Dearing (Bryce Dallas Howard) and velociraptor trainer Owen Grady (Chris Pratt) join a private rescue mission to save as many species as they can.

Not that they stay on the island for long. Fallen Kingdom is a film that is ridiculously easy to mock, but at the same time it’s also quite a lot of fun. Coming three years after the hugely successful but actually kind of terrible Jurassic World, it achieves two main tasks. Firstly, it successfully builds on the story of its predecessor rather than repeat the same tired beats. Secondly, it finally manages to get the franchise off the damned island. After four films trotting between Islas Nublar and Sorna, it’s quite refreshing to spend much of the film in California instead.

This is very much a film in two sections. The first, which pretty much occupies the entire first act, sees the ill-fated mission to Isla Nublar end in betrayal, mass destruction, and the deaths of a lot of dinosaurs. The Jurassic Park films have always played things loose with genetics and biology; here that casual treatment of science extends wildly into vulcanology, with a screenplay that doesn’t particularly care about how volcanoes work or how hot lava is. It’s comparatively easy to ignore bad science – if it isn’t, you need to stop watching Hollywood blockbusters – but it is less easy to overlook the mass carnage that follows. One of the things that the Jurassic Park movies do at their best (so not in Jurassic World) is represent their dinosaurs not as monsters but as animals. As a result, how the films depict dinosaurs dying is pretty important. It feels like there’s an unofficial set of rules: you don’t ever want to see herbivores die unless they’re eaten by a carnivorous dinosaur, and you don’t really want to see carnivores die unless either they’re eaten by another carnivore or they are trying to eat the humans – fair is fair, after all. Fallen Kingdom breaks that rule by killing an awful lot of herbivores and carnivores alike in a massive volcanic eruption. They flee, they trip over one another, and they go wildly crashing to drown in the ocean when they run out of island to escape across. Director J.A. Bayona achieves a poetic master stroke in the island’s final moments – a mournful brachiosaurus wails at the dock as the last ship of humans escape, echoing the very first dinosaur the franchise ever showcased – but it’s all incredibly upsetting to watch if you’re an animal lover. It honestly doesn’t matter that the animals in question aren’t real: buy-in into the fictional narrative means treating them as if they are.

That all pretty much takes the film to its first third. The remaining two-thirds are better left for viewers to find on their own. Suffice to say it’s a smart change-up for the franchise and, while somewhat derivative and cliched, it ticks all the sorts of boxes that one would expect a mainstream monster movie to tick. Significantly, it takes some of the weaker aspects of Jurassic World and successfully ‘rights the ship’. It all leaves the franchise in a much stronger place than where Fallen Kingdom found it.

Try not to dwell on how the film fits into the overall continuity of the franchise. Fallen Kingdom weirdly – and one assumes, deliberately – overlooks the events of both The Lost World and Jurassic Park III. The ethical quandary over whether or not to save Isla Nublar’s dinosaurs gets somewhat ruined once you remember that there is an entire United Nations-backed preserve of wild dinosaurs living one island over.

A fairly strong cast iron over many of the film’s shortfalls. Both Howard and Pratt are working with better material here – particularly Howard – while new co-stars including Rafe Spall, Daniella Pineda, Ted Levine and James Cromwell bring a lot of good work to their respective characters. Toby Jones is an unexpected pain point, over-acting in a fairly over-the-top part. Jeff Goldblum’s much-ballyhooed appearance as Dr Ian Malcolm really is just a cameo. While it’s always nice to see him, it’s a shame he is not more extensively used. Five films in, Malcolm is still the franchise’s best human asset.

You could criticise Fallen Kingdom for its silly science, or the derivative moments, or the fact that it’s stretching the concept of rogue dinosaurs eating humans for the fifth time, but the bottom line is that this is a film that does exactly what it says on the tin and acquits itself perfectly fine. If you think it’s for you, it very probably is. If you’re getting tired of the whole Jurassic saga, this seems unlikely to change your mind. It is what it is. It goes very well with a soda and a tub of popcorn.