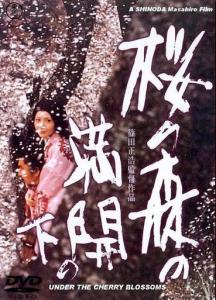 A bandit (Tomisaburo Wakayama) murders two men and kidnaps the woman (Shima Iwashita) they were escorting – intending to make her the latest of his several imprisoned ‘wives’. When he carries her up to his mountain hut, she demands he murder all of the other women bar one – a disabled young woman she insists she will use as a servant. She then pushes the bandit towards a series of horrifying crimes in order to please her.

Under the Blossoming Cherry Trees is a 1975 supernatural thriller by director Masahiro Shinoda. It is a strange, slow-burn kind of a film, one that focuses more upon unsettling the viewer than on scaring them. It is loaded with disquiet, primarily due to the forests of cherry trees that lose their blossoms in the wind like an enormous pink snow. The film actually begins documentary-style, with narration noting how modern Japan celebrates cherry blossom season with parties and picnics, before explaining that in earlier history people feared the blossoms under the superstition that passing through them would turn people insane. It is a slightly awkward beginning, but events settle down nicely once the film dives into the distant past.

Shima Iwashita is marvellous as the unnamed kidnapped woman. Her bloodthirsty mania knows no bounds, but it soon becomes so extreme that she becomes deliberately ridiculous. Demanding that the bandit murder his other prisoners so that only she can be his wife is horrific. Forcing him to find and murder specific people so that she can use their heads in a demonic puppet show is just straight-up weird. As the bandit, Tomisaburo Wakayama initially works in broad strokes. That bravado dissipates as the story progresses, and the bandit begins to feel manipulated and emasculated by his murderous spouse.

It is a strangely uncompromising work. Neither of the two leads are sympathetic. The narrative is relatively simple, but it gets unexpectedly grotesque very quickly. The characters feel like they have walked out of a film noir: the weak, easily manipulated man gets used by the seductive and manipulative woman. While it would seem a link to noir is there, it is more likely Shinoda was inspired by his favourite literature. He is a fan of Monzaemon Chikamatsu, the 18th century samurai and playwright whose works tended to focus on what were called ‘nimaime’: weak-willed men prone to falling for women (as opposed to the taciturn ‘tateyaku’ of other Japanese literature). It feels like a parallel element of culture; a Japanese equivalent rather than an American inspiration.

The tone, however, is overwhelmingly folkloric. Under the Blossoming Cherry Trees falls comfortably into the broad category of Japanese ghost stories: something inexplicable befalls the characters, and defeating the supernatural is impossible. The best a protagonist can hope for is survival, and even that is comparatively rare in these kinds of tales. The film ultimately operates in three stages: the conventional period film, the grand-guignol, and finally something altogether creepier and ambiguous.

Japanese cinema had a rough time in the 1970s, as competition from American films and television dramas cut deeply into the Japanese industry. Sex and violence were two of the tools available to provide cinema with an advantage: television was censored, and the Americans were comparatively puritanical. You can see the effect here, with more than a few gratuitous shots of partial nudity and an awful lot of bloody violence. Under the Blossoming Cherry Trees use the elements to its advantage, and ultimately transcends them. This is not one of Shinoda’s more famous works, but it is one well worth viewing if the opportunity presents itself.