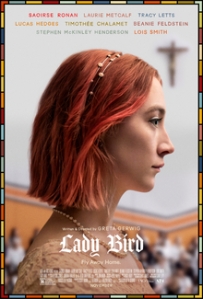 Christine “Lady Bird” McPherson is a senior high schooler living in Sacramento, California. She longs to live in a cultural hot spot like New York instead, but her average grades and family’s financial situation makes studying college on the East Coast extremely unlikely. Over her final year of high school she experiences love and sex, loses and gains friends, and continues to battle with her critical and domineering mother (Laurie Metcalf).

Greta Gerwig’s solo directorial debut Lady Bird has captured both movie goers and critics with its deftly developed characters, strong dialogue and widely feted performances. It is not difficult to see why. It has an extraordinary warmth to it, and its lead performances really are as exceptional as the acclaim and awards nominations would have you believe. Saoirse Ronan is utterly superb as the titular Lady Bird, playing a young woman who is, all things considered, a narcissistic nightmare. She should be intolerable to watch, but Ronan gives her such a wonderfully delicate undercurrent beneath that superficial bravado that we can see a deeply uncertain and doubtful core. Opposite Lady Bird is her mother Marion, played in a career-best performance by Laurie Metcalf (and Metcalf is sensational when she’s average). Her love for her daughter emerges as a constant stream of harsh criticism, with any softer affection rarely given the opportunity to emerge. When it does, it’s heartbreaking. The energy between Metcalf and Ronan powers the entire film. It’s tremendous, unmissable stuff. It feels immediately real and familiar.

The supporting performances are all worth noting, but in particular it’s worth paying attention to Tracy Letts as Lady Bird’s father, Beanie Feldstein as best friend Julie, and Stephen McKinley Henderson as the sensitive Father Leviatch – who teaches as Lady Bird’s Catholic high school.

Gerwig directs with a focus on character and conversation, which suits this kind of film perfectly. It has an easy-going beauty to it, one that matches the fairly loose and slow-moving story. It’s hugely enjoyable, but you can sense time passing just a little too slowly for comfort – particularly during the film’s weirdly unnecessary epilogue. It is, all in all, a great film about a great character, told with superb actors. Is it one of the greatest films of its year? Well…

Here’s the awkward truth about Lady Bird: it tells nowhere near as original a story as its more ardent fans appear to believe. Far from being a bold step beyond a conventional teenage ‘coming of age’ film, it is exactly that kind of conventional teenage ‘coming of age’ film. It focuses on a rebellious and troubled adolescent protagonist. She longs to live somewhere more interesting and cultured than her mundane small town American life. She dumps a loving but dorky best friend for a more popular alternative, but then realises she is faking her new life and returns to the original friend for an easily gained forgiveness. She starts dating a boy from the school play. She suffers the pain of a break-up. She has her first awkward sexual experience. In broad strokes, all of these elements are well-worn and forgettable. If you pause to pay attention, it occasionally gets actively stereotypical.

That you may not initially notice that is entirely down to those astonishing performances. It is the acting that takes the relatively cliched story and lifts it up. It makes the film transcend its screenplay into something that feels realistic, well-observed and insightful.