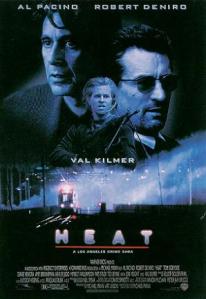 Michael Mann’s 1995 crime drama Heat is an epic and impactful cat-and-mouse story, told with elegance and style and powered by two of America’s finest-ever male actors. It is first and foremost a gripping story, but it is also a fairly bleak interrogation of broken masculinity and workaholic self-destruction. Personally I think it is director Michael Mann’s finest film. It looks outstanding. Its low-key score masterfully ratchets up the tension in one scene after another. Its entire cast deliver superb performances. It is long, but incredibly well paced. By the film’s conclusion, almost three hours after it begins, I feel as if I have gone through something epic and transcendent. I try to hold back from using the term ‘masterpiece’ when reviewing films, lest the term become so over-used as to become meaningless. Its use is entirely appropriate here: Heat is without any question in my head Michael Mann’s masterpiece.

The film unites its dual protagonists – McCauley and Hanna – by showcasing their similarities. They are both obsessive, driven men. One is dedicated to undertaking clean, efficient heists and hold-ups. The other is a relentless crusader who sidelines every other aspect of his life while hunting and taking down career criminals. At the same time the film also highlights their differences. McCauley is calm and methodical. He keeps his emotions buttoned-down and out of the way, to ensure they do not put him at risk of arrest or death. Hanna is a polar opposite: he is spontaneous and unpredictable, and bares his emotions proudly. The film lines them up perfectly as adversaries, and then tempts the audience with the possibility that they may meet one another face-to-face. Ultimately they do so twice in almost three hours. It is a work of remarkable restraint, and all the more satisfying because of it.

It is even more effective because in those two brief scenes both McCauley and Hanna clearly admire one another. They recognise and appreciate each other’s skill, and form an oddly familiar and respectful relationship. It echoes many similar relationships in Hong Kong cinema, including the likes of John Woo’s The Killer or Johnnie To’s Running Out of Time. In that regard Heat seems one of the most Hong Kong-esque films that Hollywood has ever produced.

Pacino and De Niro are exceptional. They are also surrounded by a uniformly strong supporting cast, including the likes of Val Kilmer, Amy Brenneman, Tom Sizemore, Ashley Judd, Diana Venora, Natalie Portman and Jon Voight. Dante Spinotti’s photography gives the entire film a seductive blue sheen. Eliot Goldenthal’s musical score shows incredible restraint: in some key action scenes it is essentially more of a soundscape than a score, building the intensity without every distracting from what is going on on-screen. The film’s action sequences are sharply directed and shot. They lack any excess of style, and simply demonstrate how sudden, intense and dangerous these sorts of conflicts can be.

In the end it is the individual scenes that leap out the most. Hanna and McCauley spontaneously sharing a coffee. McCauley hunting down the man who betrayed him to the police. Hanna comforting the mother of a murdered young woman. There are sparkles and glimmers of real life throughout the film. They enhance an already masterful motion picture, and give it a richness that is rarely matched in American crime films. This is one of my all-time favourite films.