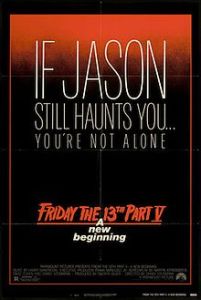 hological damage. He has constant nightmares about Jason, and even hallucinates him during the day. After moving to a halfway house for troubled teens, Tommy is alarmed when a new spate of murders begins anew: could Jason somehow be alive?

You simply cannot keep a horror franchise down for long. A year after releasing Friday the 13th: The Final Chapter, Paramount bounced back with A New Beginning. It was intended as a fresh start for the franchise beyond Jason Voorhees, re-positioning Tommy (played by Corey Feldman in the last film and in a brief prologue here, before handing over to John Shepard) as the central figure for a fresh trilogy of gory thrillers. Things did not go according to plan. After The Final Chapter presented the series at its absolute best and most dramatically effective, A New Beginning is not only disappointing but stunningly inept. The film is so incompetently written, directed and performed that in recent years it has become a minor cult classic for fans of ‘so bad it’s kind of good’ cinema. In all honesty those cult fans are quite welcome to it.

To give credit where it is due, the film does work very hard to restart the franchise with a modified direction and purpose. It is also good to see a Friday the 13th film that follows up on the survivor of an earlier instalment and showcase the profound emotional damage escaping Jason Voorhees would cause. Sadly that is about the limit of the film’s inventiveness. The characters are thinly drawn even by slasher movie standards, and for the most part performed with some jaw-droppingly bad acting. John Shepard does okay as the teenage Tommy, and a few of the supporting players acquit themselves reasonably, but beyond that the cast are generally quite grating to watch. It actually gets quite funny from time to time, but rarely at moments where the audience is supposed to be amused. When it comes to a few of the performances, one gets the impression that the actors are deliberately doing a bad job because they do not respect the project. All up it is by a considerable margin the worst-performed film in the franchise so far.

The film aims to present a suspenseful mystery: is Jason Voorhees somehow returned from the dead? Unfortunately it over-plays its hand by completely hiding the mysterious new killer from view – thus making it obvious that Jason is not involved – and the identity of the copycat killer could only be more obvious with the use of neon signs. It also concludes on a perplexing note that suggests Tommy Jarvis is about to become a Jason-style serial killer himself. Such a shift is very poorly motivated – thankfully the sequel completely ignores this ending and sets off on a fresh direction of its own.

By any sane measure this is a terrible film, watchable only by franchise die-hards and completists or the most undiscriminating of viewers. It overloads on blood and gore and partial nudity yet forgets things like suspense, tone and atmosphere. It is surprising that Paramount continued with the series after this: a more effective attempt at horror franchise suicide is difficult to imagine.