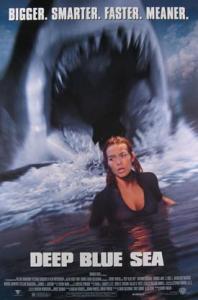 In a converted submarine base on the open ocean, a team of scientists led by Dr Susan McAlister (Saffron Burrows) have genetically modified sharks to make them both larger and smarter. In return they can extract a fluid from the sharks’ brains that may hold the cure to Alzheimer’s. Concerned over safety at the facility, McAlister’s backers dispatch executive Russell Franklin (Samuel L. Jackson) to inspect the operation. When a storm hits the facility, a chain of tragic events see the crew trapped inside a flooding maze of rooms and tunnels, with the sharks in hot pursuit.

There is no avoiding that Deep Blue Sea is a monumentally silly film. It is based on a ridiculous premise, and its handle of real-world science is laughably misguided. Its characters effectively work as stereotypes, and regularly engage in the most foolish and unbelievable of behaviours. The film has also dated terribly in the 18 years since it was first released, particularly when it comes to its cartoonishly rendered CGI sharks. Oh, and yet…

There is a knowing glee embedded here. It is an unbridled enthusiasm that seems to openly admit that it is a terrible film. Its director, Finnish filmmaker Renny Harlin, has only ever managed one or two genuinely good movies in his career – depending on how you feel about Cliffhanger or The Long Kiss Goodnight – and the rest of his resume is packed with films like this, Die Hard 2, and Cutthroat Island. Here things feels a little more playful than his usual outings. Here the premise is so silly that it refuses to play out with a straight face. This is panicky scientists getting chased around a sea base by super-intelligent sharks; there is not a lot of room for pathos. The more unbelievable and contrived the film becomes, and the more foolish the characters behave, the more perversely entertaining it all becomes.

In part the film manages to pull this off because it has a reasonably strong cast. Samuel L. Jackson is the film’s sole A-list performer, and when he abruptly leaves the film shortly into its second act it falls to Thomas Jane to take over. Jane is a rock-solid actor and appears to have a gift for bringing a lot more entertainment value out of a screenplay than its writer did. Other actors include Saffron Burrows, Jacqueline McKenzie, LL Cool J, Michael Rapaport and Stellan Skarsgård – all of them have been in better films than this, and bring a lot to the table in terms of making the unwatchable at least partially enjoyable.

Make no mistake: this is a terrible film. It indulges in stereotype, is under-motivated, and regularly makes no logical sense. At the same time its premise is so ridiculous, and its execution so dedicated to that premise, that it is difficult not to be just a little bit kind towards it. It is as dumb as a bag of hammers, but has an oddly lovable quality about it. It is absolutely awful, but awful in a good way.