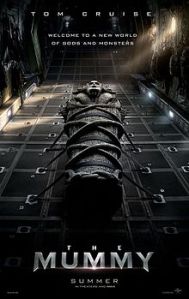 Military officer and part-time antiquities thief Nick Morton (Tom Cruise) uncovers the buried prison of 5,000 year-old Egyptian princess Ahmanet (Sofie Boutella). By accidentally releasing Ahmanet, he becomes the chosen vessel for the evil god Set to physically enter the world – unless he, archaeologist Jenny Halsey (Annabelle Wallis) and the mysterious Dr Henry Jekyll (Russell Crowe) can stop Ahmanet before it is too late.

The Mummy comes to cinemas with the full weight of studio franchise expectations and preemptive audience schadenfreude resting uncomfortably on its shoulders. Quite frankly the film has been tasked with the impossible: tell an entertaining dark fantasy story while simultaneously performing as a Tom Cruise action vehicle, remaking a 1932 Universal horror picture while satisfying fans of an earlier 1999 remake, and launching an entire inter-connected franchise of horror and fantasy films based on the Universal Pictures monster movies of the past. There remains a lot of audience affection for that 1999 remake. There is also a constant cynical attitude against Tom Cruise these days; it really feels as if, Mission: Impossible films aside, English-speaking audiences are chomping at the bit to abandon him in droves. Now admittedly The Mummy is pretty terrible on its own merits, but I think it is important to note just what a misguided and ridiculous proposition it was from the get-go. This is one film project that never had a change of creative success. I honestly think that both critics and audiences alike were waiting for it to fail.

All that said, it is without question a terrible movie. There are plenty of good ideas embedded in it, but they are all at a momentary micro-level. A laugh-out-loud comedy bit here. A beautifully composed shot there. The odd piece of production design. In isolation each of these elements have a lot of appeal, but in context they completely fail to work. Let’s use a fairly tortured analogy (after all, it’s a pretty tortured film): if each of these positive elements is a piece of a beautifully attractive jigsaw puzzle, director Alex Kurtzman and the vast array of producers and executives overseeing The Mummy have taken these pieces and assembled them in random order with a hammer, banging on each element until it fits one way or the other.

First and foremost there is the problem of Tom Cruise, who is badly miscast in a manner that warps the entire film out of shape. He tends to dominate any movie in which he stars. Here he sucks an awful lot of oxygen from The Mummy that could otherwise be going to its titular villain or its supporting cast. He is also playing an actively unlikable character: Nick Morton is introduced as an opportunistic thief, and does not develop any further from there. He is regularly presented as self-centred and cowardly, and the climax of the film effectively involves him physically grabbing a woman by the throat and beating her half to death. Perhaps it makes sense in the context of the story, but the optics are horrifying enough that one wonders where the studio representatives were. Of course the film frames Nick as the hero, which just makes his characterisation all the more awkward and unwatchable. Perhaps the role would almost work with a younger actor, where the arrogance and cocky self-obsession would feel more at home, but Cruise is 54 years old. His days of believably playing that kind of role seem firmly behind him. His ongoing penchant for starring opposite women in their 20s and 30s (his co-star here was not even alive when Cruise starred in Risky Business or All the Right Moves) is definitely heading into Sean-Connery-in-Entrapment territory.

The strong focus on Nick Morton (a name so generic it is as if the six credited writers honestly did not care) comes at a loss of focus on Ahmanet. Both the 1932 original and the 1999 remake spent quite a lot of time developing Imhotep; Ahmanet gets very little by comparison. What is worse the tragic element of the mummy character is badly mishandled. Initially it seems the film’s flashbacks are urging the audience to sympathise with Ahmanet, but any attempts to do so fail the moment we see her violently murder a baby. It is a terrible misuse of Sofie Boutella, who has demonstrated on multiple occasions a huge amount of promise. That promise goes almost entirely unrealised here, and the less said about the film’s weird attempts to sexualise a 5,000 year-old undead super-villain the better.

Annabelle Wallis has absolutely zero presence as Jenny Halsey. She is introduced as an intelligent field archaeologist who actively runs around war zones protecting historical sites and recovering antiquities. That sounds amazing on paper. In practice the screenplay gives her precious little to do other than perform the time-honoured role of ‘the girl’. Wallis is given precious little with which to work, and fails to add anything distinctive of her own. Jake Johnson is much better as Nick’s sidekick Vail, although again he seems somewhat under-used and his purpose as a comic relief character run wildly at odds with the film’s more horrific tone.

Russell Crowe plays Dr Henry Jekyll, the film’s most obvious nod to Universal’s extended Dark Universe franchise. I am a fairly keen fan of Crowe. Over the decades he has done some phenomenal work, with his only obvious Achilles heel being a general inability to perform English accents. This film asks him to perform two. On the plus side Crowe seems to be the only actor aware of how silly the film is, and adjusts his performance accordingly. It is far from his best work – I honestly do not know why he is playing Jekyll and Hyde at all – but to his credit he is the most entertaining actor in the entire colossal misfire.

Some of film’s horror imagery is good. A few specific moments are great. They are scattered about the place in a slipshod manner, from the weirdly messy and boring prologues to the deeply unsatisfactory climax. They do not really work alongside the comedy bits or the action. The Mummy is a strange manufactured product, produced with an eye to launch a multi-film Marvel-style franchise rather than to be an entertaining film in its own right. Even before the film’s release Universal Pictures was announcing a raft of forthcoming fantasy/horror films beginning with Bill Condon’s Bride of Frankenstein in 2019. After the near-total failure of their first attempt, it is only sheer bloody-mindedness that is going to keep Dark Universe going.