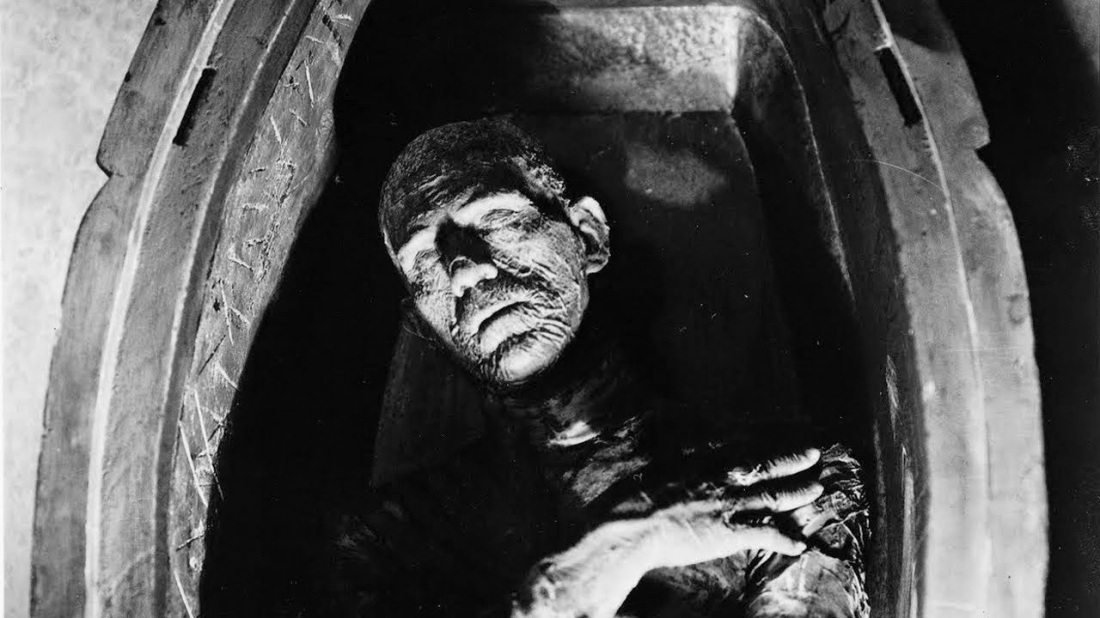 At an archaeological dig in Egypt, a foolish assistant reads from an ancient scroll and reanimates the excavated mummy of the 3,700 year-old priest Imhotep (Boris Karloff). Ten years later Imhotep returns, pursuing Helen Grosvenor (Zita Johann) – a young woman who appears to be the reincarnation of his true love Ankh-es-en-amun.

A year after finding huge commercial success with their horror films Dracula and Frankenstein, Universal Pictures shifted gears slightly to produce The Mummy, a modern-day horror film in which a resurrected villain with supernatural powers targets an innocent young woman to join him among the undead. Carl Laemmle Jr, who produced the earlier horror films, also supervised this one (he was head of production at the time), and he appointed Karl Freund to direct. Freund was a widely acclaimed cinematographer, having shot both Metropolis (1927) and Dracula (1931), and The Mummy marked his directorial debut.

Given the title and the contemporary popular culture surrounding mummies – a culture helped along in no small way by Stephen Sommers’ in-name-only remake in 1999 – The Mummy turns out to be something of a surprise. Imhotep only appears in his iconic burial wrappings for a single scene. Through the rest of the film he appears as a middle-aged man, with a gaunt face and cracked, dry skin. He behaves more like an evil wizard than a shambling undead creature. It presents a nice change for Boris Karloff from Frankenstein’s monster, and allows him to showcase his dramatic flair and screen presence much more effectively.

Much of the surrounding cast are also relatively strong. Zita Johann is particularly good as Helen Grosvenor, coming to the part with a forthright and confident manner and doing a great job of the various mind control sequences and personality changes as Ankh-es-en-amun. In supporting roles both Arthur Byron and Edward Van Sloan deliver engaging performances; they are not required to do much beyond feed in plot exposition and add gravitas, but they do it well. The key weak point among the actors is David Manners as romantic lead Frank Whemple. He comes across as rather wooden and awkward, and fails to bring the flair to his role that both Johann and Karloff bring to theirs.

It is a curiously intimate film. Despite its Cairo setting it generally takes place across a series of parlour rooms and museum displays. The cast is relatively small, and compared to other Universal monster films it is a remarkably talky affair. That does not hamper the movie, but it does provide a specific cadence. Given its mystique and popular imagery, the film does come as something of a surprise.

Certainly The Mummy fails to match the creative heights of Dracula or Frankenstein, and its legacy on the horror genre cannot compare to The Wolf Man, but it does sit comfortably in the canon of early American horror films. It is a pleasing entertainment, and a well-crafted thriller. It only took Universal Pictures eight years to remake it too, as The Mummy’s Hand; something to keep in mind the next time somebody claims all Hollywood does now is produce remakes.