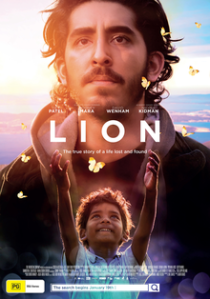 Five year-old Saroo lives in Khandwa, India. After getting onto the wrong train he soon finds himself 1,600 kilometres away in Calcutta, unable to speak the language or to ever find his way home. Eventually he is adopted by Australians Sue and John Brierley (Nicole Kidman and David Wenham). Decades later, an adult Saroo discovers the computer program Google Earth – and realises it may be the tool he needs to find his birth family.

Lion is a 2016 Australian drama, based on the true story of Saroo Brierley and adapted from his own memoir. It is also the debut feature for director Garth Davis, in what has to be one of the strongest first films of recent years. It is a remarkable film thanks to very strong direction and editing, a heartfelt screenplay and top-notch performances.

The film’s opening act is a terrifying journey, following the five year-old Saroo from a life of abject poverty with his mother, brother and sister all the way to life on the street in Calcutta. It is all played out from Saroo’s perspective. He does not even speak the language – he knows Hindi, and Calcuttans speak Bengali. After failing to get anybody to listen to him at the train station he winds up sitting with some homeless children in a commuter tunnel. When strange men arrive in the middle of the night to snatch the children up and take them away, Saroo runs for his life. We never learn who the men are or where the children go. We don’t even really see their faces. It is just anonymous, unexplained terror. Moving on Saroo is almost taken again by a visibly grooming paedophile before getting rescued from the street and dropped off at a state-run orphanage – which does not seem any safer or more welcoming than the streets were. The whole sequence of events is brilliantly put together, with Davis emphasising Saroo’s total dislocation and helplessness to outstanding effect.

After this harrowing opening act the film moves to Australia, as Saroo is raised – alongside another Indian foster brother named Mantosh – by Sue and John Brierley in their Tasmanian home. As an adult Saroo (now played by Dev Patel) moves to Melbourne, studies hotel management and connects with an American girlfriend named Lucy (a weirdly under-used Rooney Mara). A party at the home of some Indian international students begins to spark childhood memories, and Saroo gradually becomes obsessed with finding his birth mother.

It is fair to say there is actually not a great amount of story to Lion. A child is lost, adopted, and then ultimately uses the Internet to try and find his way home. On top of that, the film does not waste time on redundant elements of story. We do not actually see Saroo and Lucy begin dating: in one shot they’re joking at one another on the street, and in the next they’re going to a party as a couple. Saroo’s adopted brother Mantosh does not adjust to life with the Brierleys, coming to Australia  psychologically damaged by the ordeals we see Saroo narrowly avoid. We do not see the struggles progress. We see him engaging in self-harm as a child, and the next time we see him he is 20 and living on his own in a cheap rented shack in Tasmania. It is a master work in efficient storytelling, and it leaves much more room for the emotional heart of the story.

Dev Patel delivers a strong and emotive performance as the adult Saroo, showing off a complex mess of regret, guilt and sorrow as his memories of life in India begin to overwhelm his life in Australia. Rooney Mara and David Wenham are both excellent, albeit in comparatively small roles. A real surprise is Nicole Kidman, an actor I have often found somewhat underwhelming. She is tremendous as Sue, and a lengthy monologue midway through the film stands up as one of the best pieces of acting she has ever delivered.

Lion tells a very personal story, and Davis has left an admirable amount of room to let its full emotion impact play out. It looks phenomenal, thanks to Greig Fraser’s strong cinematography. That is an essential aspect of the film, since at key moments it relies heavily on the audience recognising the geography of Saroo’s home town. It is well performed and beautifully written. Come the local awards season I expect it may well clean up. Certainly it deserves to.