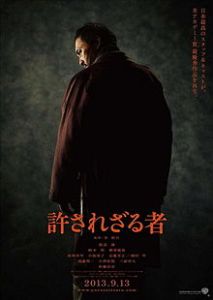 In late 19th century Hokkaido two brothers disfigure a local sex worker. When the local sheriff Ichizo Oishi (Koichi Sato) refuses to punish the men with more than a fine, the local sex workers band together to offer a bounty of their own on the two brothers’ lives. Among the bounty hunters who ride into town is Kingo Baba (Akira Emoto), who drags in with him Jubei Kamata (Ken Watanabe) – a notorious and murderous renegade who claims to have abandoned his violent past for good.

Remakes are such a cinematic phenomenon. In live theatre, probably cinema’s closest artistic cousin, re-visiting old playscripts and presenting them with fresh casts and new creative angles is not only commonplace but actively celebrated. There are even prestigious awards specifically given out to the best revival productions. This is generally not the case with film, where a remake is more often that viewed as a cynical cash grab by a film studio – which is, to be fair, pretty common – or as a creatively bereft act of imitation by filmmakers not talented enough to come up with a story of their own.

When undertaken correctly, however, the remake can deliver remarkable dividends. I am particularly fascinated by remakes of films produced in other languages and cultures. Hideo Nakata’s Ring, for example, derives so much of its power from the specifically Japanese folklore and horror traditions that inspired it. When adapted in America by Gore Verbinski, a whole new framework was required to make the same story work for an American audience. Similarly John Sturges did a masterful job of taking Akira Kurosawa’s Seven Samurai and transforming it into an iconic American western: the same story, but transformed to suit a fresh context. To me these cross-cultural remakes are no different from a theatrical revival: the same widely enjoyed story, but a fresh look, cast and angle. A new background and culture delivers new insights.

In this case Korean-Japanese director Lee Sang-il has taken Clint Eastwood’s award-winning 1992 western Unforgiven and relocated its story to 19th century Japan. The story is close to identical: instead of Clint Eastwood playing an old and emotional broken former outlaw named Bill Mummy, the audience is presented with Ken Watanabe as Jubei – a former samurai with a long-held reputation for horrifying brutality. He lives out in the wilderness now on a failing farm with two young children. His wife, a member of the local Ainu community, has died. Watanabe gives a beautifully soulful performance packed with heartbreaking weariness and slow, mournful silences. Anybody who has only seen Watanabe perform in American films, such as Godzilla, Inception and The Last Samurai, may be surprised at just how talented an actor he is.

The supporting cast are also very strong, notably Akira Emoto as fellow former sworsdman Kingo (this version’s Morgan Freeman, for fans of the original) and Jun Kunimura as the boastful and arrogant bounty hunter Masaharu Kitaoiji. Koichi Satao is particularly strong as local lawmaker Oishi, a cruel and flamboyant man who not only tortures and kills his captives but deliberately humiliates them in the process.

Between Oishi and Jubei there is a huge amount of what makes this film so distinctively Japanese. The Shogunate has ended, and ageing former samurai like Jubei must cope with a rapidly changing world. He dresses in traditional Japanese clothing, and carries a rusted wakizashi sword that powerful reflects his broken, increasingly feeble personality. Oichi, on the other hand, looks resplendent in pattern waistcoats, luxurious overcoat and bowler hat. He has embraced the foreign style and personality that the likes of Jubei have resisted. This transitional period of Japanese history enhances the story in a way that Eastwood’s original does not: it gives the story an entirely new style and aesthetic.

Setting the film in Hokkaido also works tremendously to the film’s benefit. It is a frozen, bleak place that piles onto the relatively depressing plot. This is a powerful film, but it is absolutely not a happy one. The story also intersects very well with the plight of the Ainu: indigenous peoples of the island slowly getting forced off their land by the advancing and expanding Wajin. It gives the film a dimension not even possible in Eastwood’s version.

This is exactly what remakes are for: retelling old stories with new ideas, and exposing them to audiences that might never have even seen the foreign-language original. On a conceptual level remakes have been effectively demonised by an ongoing string of cynical Hollywood replicas, designed purely to save on marketing costs by relying upon pre-existing intelluctual property. Films like Unforgiven hopefully redress that imbalance, even if it is only to a modest extent.