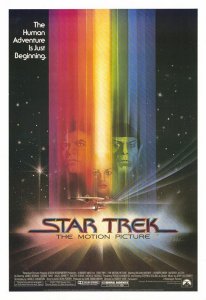 A vast and unknown object is approaching Earth. It appears to destroy any starships in its way, and its ultimate intentions are a mystery. Admiral James T. Kirk (William Shatner) arranges to re-take command of his former ship the USS Enterprise and to investigate the mysterious entity and prevent it from destroying the planet. While doing so he is reunited with his former crew, including chief medical offer Dr Leonard “Bones” McCoy (DeForest Kelley) and the retired former commander Spock (Leonard Nimoy).

It is easy to look back on Star Trek: The Motion Picture and fail to appreciate what a big deal it must have been to its fans back in 1979. When Star Trek Beyond was released last year, it was the 13th feature film in the series, and part of a broad media empire that included six separate television series and a continuing wave of videogames, spin-off novels and merchandise. To an extent its fans today take Star Trek somewhat for granted. Back in 1979 there had been three years of an original television series, and a short-lived Saturday morning cartoon. Seeing the crew of the USS Enterprise back in action – and on the big screen, no less, was a pretty big deal.

There is an enormous weight of expectation that hangs over Star Trek: The Motion Picture. There is a kind of gravitas thrust upon it as a result, and to a large extent it kills the film. It is a comparatively humourless work, despite being adapted from what was a regularly light-hearted and playful sort of a show. The cast have largely become middle-aged and grumpy. They do not seem to talk to each other any more. The actors – William Shatner in particular – try to add a little spark of life to their interplay and exchange, but they are fighting against a ridiculously po-faced screenplay. Even the title – not Star Trek: The Movie but The Motion Picture – points to an overly portentous and unnecessarily serious work.

Not only is the film too serious, it is also much too slow. In one notorious scene it takes Kirk and his engineering chief Scotty (James Doohan) more than five minutes of screen time to take a small shuttle to the USS Enterprise. The scene is clearly intended to inspire a sense of awe, but it is so long that after the fourth lingering model shot it simply inspires boredom. The only respite is watching Shatner struggle to find increasingly awed facial expressions over the course of the five-minute fly-by. All of the model sequences feel like this. It only really works once, which is in the film’s later scenes as the Enterprise descends further and further into bowels of a massive alien structure on its way to Earth. That gives a profound sense of scale. Other scenes give a profound sense of padding.

There is precious little plot, and while the core concept is a solid one it is far too slight to justify its running time. It is also taken pretty much wholesale from an original television episode, “The Changeling”, which the Enterprise discovered a different satellite once launched from Earth now returned with vastly expanded powers and intelligence. That version of the story was over and done in less than 50 minutes. The Motion Pictures takes more than twice as long. The bulk of the film seems taken up by strange irrelevances and extraneous details. Even worse, the story leaves the famous Enterprise crew to essentially act as spectators in someone else’s adventure. Much more happens to new characters Captain Will Decker (Stephen Collins) and navigator Lt Ilia (Persis Khambatta) than to any of the fan favourites. Some of the TV characters – Sulu (George Takei), Chekov (Walter Koenig) and Uhura (Nichelle Nichols) – barely scrape by with cameos.

There is admittedly some nice visual imagery to the film, and an occasional moment of proper wonder, but it is all stretched out interminably. Pent-up demand brought Star Trek: The Motion Picture its audience, and it is only via a canny rethink and a significant budget cut that Paramount let the franchise continue. It is a decision for which we can all be thankful: without that vision for a better sequel, Star Trek: The Motion Picture could have honestly killed the franchise stone-dead.