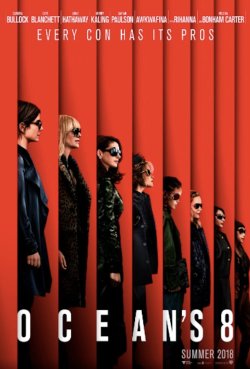 Con artist and habitual criminal Debbie Ocean (Sandra Bullock) steps out of a five-year prison stay with the plan for her next heist already worked out in her head. With her cynical partner Lou (Cate Blanchett), she recruits a skilled team of women to steal a $150 million-dollar necklace from around the neck of a famous movie star (Anne Hathaway) during the New York Met Gala – the highest-profile party of the cultural elite’s year.

Back in 2001 Steven Soderbergh directed an all-star cast in the cocky but charming heist remake Ocean’s 11. The audience bought into its sense of cool so much that it was followed by two sequels. Now the franchise returns for a fourth instalment. Soderbergh has shifted from directing to producing, while this new iteration comes co-written and directed by Gary Ross (Pleasantville, The Hunger Games).

The familiar tone of the original trilogy holds firm. Ocean’s 8 engages in a faux-nostalgic burst of 1960s cool: cool fashion, cool photography, and a particularly fitting retro-styled musical score by rising star Daniel Pemberton. It follows the same story structure and content very closely: someone named Ocean gets out of prison, assembles a team one person at a time, sets up and explains a heist, and then rolls it out for the audience with several unexpected twists, turns, and near-misses. That the film follows so closely to this pattern is to its detriment. To a large extent Ocean’s 8 feels like a gender-swapped copy. To make matters worse, this new film somehow manages to be even more straight-forward and simple than its predecessors – none of which were particularly sophisticated in the first place. This is categorically a low-tension exercise. Then there is the problem of the slightly woolly plot structure, which reaches an emotional peak at the two-thirds mark, and then has the gall to ramble on for an additional half hour.

Despite all that, there’s the cast. Put simply, Ocean’s 8 boasts one of the best ensembles we can remember seeing in this kind of glossy Hollywood movie. Soderbergh’s Ocean films worked largely on the back of its cast – George Clooney, Brad Pitt, Carl Reiner, Matt Damon, and so on – and in that regard Ocean’s 8 ups the ante even further. Gary Ross delivers Sandra Bullock as a cool professional criminal, Cate Blanchett as a punk-rock Australian, Helena Bonham-Carter as a nervous Irish fashion designer, and Anne Hathaway as a pitch-perfect self-obsessed Hollywood star. On top of that it throws in superb comic actress Mindy Kaling, the stunningly talented Sarah Paulsen, solid turns by musicians Awkwafina and Rihanna, Richard Armitage as a hapless contemporary artist, and James Corden cast perfectly to type as an English insurance investigator. In all honesty it is not worth going to Ocean’s 8 for the script, but also in honesty it’s worth going multiple times for the actors. They take an average story and make it sing. They present the sorts of characters that you actively want to spend time with.